Green Dragon Powered by UBOX is the 3rd Volvo 70 entered in the 2018 Legends Race from Gothenburg to The Hague. 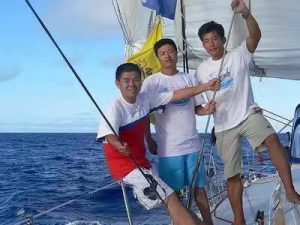 Green Dragon was the first Chinese backed entry in the Volvo Ocean Race. She was sponsored by Wei Chai Power and Triangle Tyres from China and Discover Ireland hence her name.
Skippered by Ian Walker, who went on to win ‘The Volvo’ two editions later, Green Dragon not only shared a Chinese sponsor’s hopes, she also carried the first Chinese crew member in Guo Chuan who sailed as the team’s On Board Reporter as the position is now known. Guo went on to become a true legend in Chinese offshore sailing competing in the Mini-Transat, setting the record for a single handed circum-navigation in a 40 footer, the reference time for the North East Passage and his final voyage attempting to set a new Trans-Pacific record on the Trimaran Qingdao, the former IDEC.
Sadly on this last record attempt Guo Chuan was lost at sea with all that was found on his boat being a severed harness tether.
It is to honour Guo’s memory that Wang Bin, CEO of UBOX and a keen sailor himself, decided to charter Green Dragon to take part in the Legends Race. In fact Wang Bin was Guo Chuan’s main supporter on his Mini-Transat and solo circumnavigation, part of a long association between the two men.
Always at the forefront of sailing development in China and the founder of the China Association for the Promotion of Sailing (CAPS) Wang Bin is somewhat of a legend in Chinese sailing himself.
He circumnavigated the globe on his 60 foot aluminium Alubat sponsored by SINA and China Mobile along with his friends, some of whom will be joining him on the Legends Race.
A huge fan of the Volvo Ocean Race and somewhat more than just a fan of Dongfeng Race Team as between VOR editions Charles Caudrelier skippered Wang Bin’s Cookson 50 UBOX to a 3rd Overall in IRC and 1st Overall ORCi in the 2016 Rolex Sydney Hobart while using the boat as part of the team selection process.
In return Wang Bin became the team’s leg jumper when the fleet departed Hong Kong for Auckland.
Green Dragon powered by Ubox will be crewed by a combination of East and West with Wang Bin and a number of his fellow members of CAPS joining the western owner Johannes Schwarz, his skipper Benedikt Clauberg and a number of European sailors for the Legends Race.
Green Dragon powered by UBOX, a Volvo Ocean Race Legend being sailed in memory of Guo Chuan, a true Chinese (and Volvo) sailing legend. A unique example representing the Past, the Present and the Future of Chinese Offshore Sailing.

the sound of one hand clapping

back from the grave