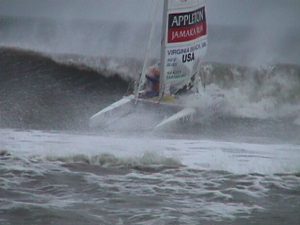 After watching half a dozen aborted attempts to restart the infamous Worrell 1000 over the past 15 years (including our extensive work helping Mike Worrell during his final attempt at redemption before his death), we might just have a bit of PTSD when it comes to another possible relaunch of the race that best reflects American sailing’s heyday. Still, we’re happy to see that Organizers behind the May 2019 running of the “Worrell 1000 Reunion Race” have at least gotten the ball rolling with a website, Facebook Page, and now Sailing Instructions with more announcements slated for July 1st.
We would, however, counsel you against reserving your hotel rooms just yet.  We’re told the same Organizers cancelled the much smaller, easier to run Florida 300 last year, and there just doesn’t seem to be much commitment or resources behind the current effort.  Attempting to cash in on the success of the Race2Alaska’s popular nickname, organizers are calling their race the W1KRR, which is derivative and stupid.  Their new logo looks like a 4-year old drew it on a napkin.  The randomly capitalized SIs call for two classes of boat that are barely sailed in the US; the box rule F18 and the dinosaur-rare non-foiling version of the NACRA F20 Carbon.
Of course the Organizers could be simply generating noise to gauge whether there’s really enough interest in the race, which isn’t a great sign, but there’s certainly plenty of interest in the race that still generated one of the most widely read and well-written news stories ever written about sailing in the US, and we suggest you get involved in the thread if you want to be part of this thing.  We certainly do!

painted into a corner