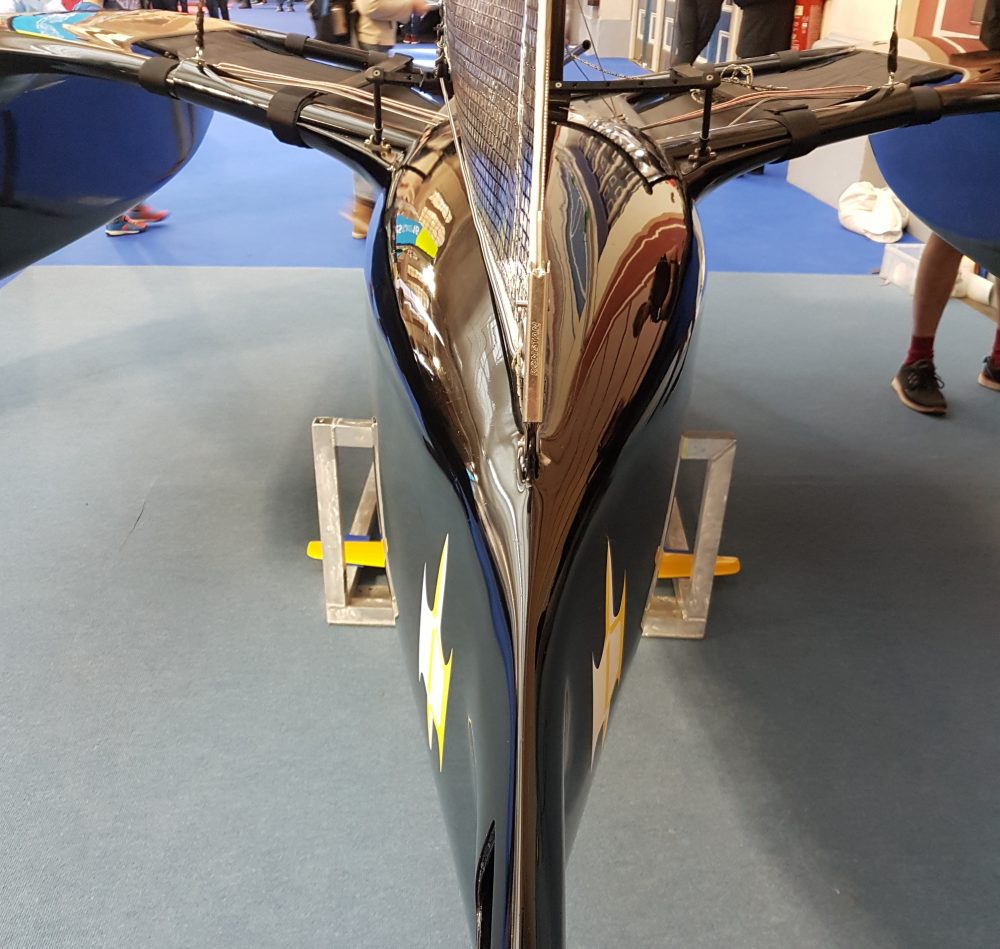 This past weekend the ORMA 60 Mighty Merloe won Best Elapsed Overall and Best Corrected Overall in the Newport to Ensenada International Yacht Race, the classic SoCal coastal race. The N2E record-holding MOD 70 Orion from San Francisco came down to play this year, making for an exciting match race in the ORCA Maxi division.
At the start line we tacked to leeward of Orion and had some close quarters maneuvering as we both approached the line early. Orion had to head up to avoid us and accelerated across the line early. We bore off down the line, probably giving the pin end committee boat a bit of the thrill, and managed a clean start. Orion’s restart gave us a chance to reach offshore to an early lead, but Orion took a lower coastal route and reeled us in.
The breeze was light early on. We got a bit nervous being far away from Orion. There was also an unusual shudder running through Merloe. We could feel it in the helm, the deck, the rig–the whole boat was shaking like we were dragging a fishing net. With three rudders, two foils, a daggerboard, and a propeller, there’s lots of appendages to snag something, but we could never find the culprit.
As the wind built, the boat smoothed out and we gained pace. We pulled gradually ahead and down past the Coronado Islands were able to drive down in front of Orion into a nice position about 1.5 nm straight ahead of them.
We were starting to think about the jibe when there was a bang and the gennaker dropped about 15 feet. The cover on the halyard had broken in the jammer inside the rig that functions as the halyard lock. We re-hoisted, but with a broken cover the winch was just milking the cover off of the core and the gennaker was quickly sliding back down. We decided to furl the gennaker, milk the cover back up the rope, and lock stitch it so we could set the halyard on the winch.
Meanwhile Orion gobbled into our lead, and within minutes they were within hailing distance astern of us, going several knots faster. We managed to hold them off under jib as we fixed the halyard. Unfortunately I couldn’t stop and stare, but the view looking straight down the bows of a MOD 70 flying two hulls under gennaker at 30 knots is pretty mesmerizing.
Gennaker hoisted, unfurled, and we were off again. Orion jibed; we matched. Into the bay we went and two more jibes found us reaching toward the finish line under main and solent, with Orion on a solid downwind layline. We managed to hold them off and crossed the finish line just minutes ahead.
A great race. Thanks to owners Enloe and Tom Siebel for putting together such fast boats and talented crew.  About the picture: Over the past few years it has become a tradition that we take the Newport Harbor Yacht Club Juniors out sailing on Mighty Merloe prior to the race. It’s cool to see Enloe, the owner of Merloe and a pioneer of multihull sailing in Southern California, sharing the experience with the kids. We’re looking forward to seeing what the future holds for them. – Will Suto.