they had a hobie day. two of them, in fact. 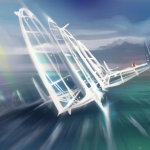 Race Report
Hawaii’s annual Lipton Cup regatta took place this weekend and served up the type of champagne conditions that left competitors collectively pinching themselves for living in paradise. With teams from four different yacht clubs meeting up to duke it out on an ocean course off Kaneohe, there were plenty of unknowns going into the weekend; a new scratch boat to the fleet, a lot of new crew members on most of the boats and a new venue for this regatta, as of late. One known variable however was that the defending regatta and “home team” from Kaneohe Yacht Club would be very hard to beat.
Stacked with talent and a renowned boat which rates well and is superbly suited to the conditions off Kaneohe, the Hobie 33 “Yellow Dragon” came in as the odds-on favorite to defend the title. Also vying for inter-island bragging rights and trying to take KYC’s trophy was Hawaii Yacht Club’s Hobie 33 “Mayhem” and the sole off-island boat, Nawiliwili Yacht Club’s Olson 30 “Fast Company”. The newcomer to the regatta was Waikiki Yacht Club’s X-35 “Zamboni”. After a string of four wins in a row on the Humboldt 30 “High Tension” was snapped last year, the club came back this year on a different boat but with the same goal; to win.
When the gun went off to start the first race, Zamboni showed some serious legs upwind while the Hobie’s battled it out on the first lap. HYC’s Hobie 33 Mayhem led KYC’s H33 Yellow Dragon to the top mark and back down to the bottom mark, but a bad rounding and a spinnaker touching the mark allowed KYC to slip by and jump to a commanding lead over Mayhem, who had to do a penalty turn for hitting the mark.
A passing squall-front came through with rain, a shift and a massive build in the pressure which created a ripping ride for the second downwind run. Zamboni had a big wipe out but recovered to still correct out second, while Yellow Dragon held on for the win with Mayhem off the pace in third and Fast Company in fourth. 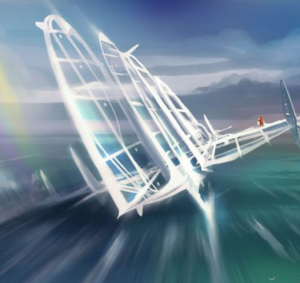 It was more of the same in race 2 with Yellow Dragon sailing clean as always while Mayhem botched another leeward mark to fall off the pace and finish third again. KYC had two bullets with Zamboni on a pair of deuces, Mayhem on a pair of three’s and Fast Company with a couple of four’s. With KYC putting up a picket fence in last year’s regatta before self-imposing a mercy rule and bailing out of the last race to give somebody else a chance, we on Mayhem were fearing another blowout.
In race 3, we came out swinging on Mayhem and managed to put together a clean race with good boat speed and narrowly pip the Yellow Dargon and the Olson 30 to finish the first day on a 3-3-1 and narrowly move into second place over Zamboni’s 2-2-4. The Yellow Dragon had a solid lead with their 1-1-2 while Fast Company rounded out the fleet with their 4-4-3.
Enjoying the hospitality and lovely venue that is Kaneohe Yacht Club, our morale on Mayhem was high after day one. We knew exactly where we needed to (and could) improve, but with a breakthrough win over our Kaneohe rivals, we knew they were beatable and we went into day two hoping to score two bullets.
It wasn’t meant to be however, as day two brought more of the same as day one. We had good boat speed against the Yellow Dragon again, but as is generally the case in racing sailboats, the team who made the fewest mistakes won, and unfortunately that wasn’t us. Yellow Dragon took the bullet in race four meaning that they had it all but locked up, but with second and third place still up in the air, there was still plenty to play for in the final race. 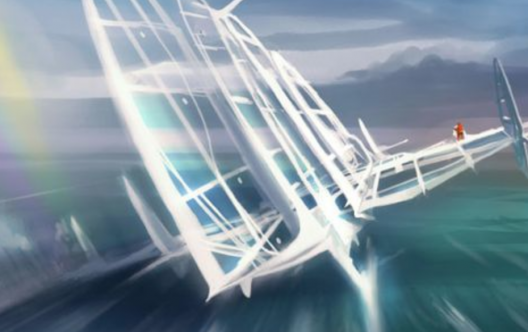 Zamboni sailed clean around the course to correct out for the first time of the weekend, while the two Hobie’s traded their own lead a few times and crossed the finish line nearly overlapped, with the yellow boat characteristically just a bit ahead of the white one; indicative of the weekend and the rivalry in general.
Kaneohe Yacht Club pulled out all of the stops and provided the competing sailors with a fantastic regatta, great race committee work, good food, free booze and even tee’d up spectacular weather on a weekend that was originally forecast as fresh to frightening.
Massive props to all of the competitors, especially the Lipton Cup winners Yellow Dragon from Kaneohe Yacht Club and the off-island boat, Fast Company from Nawiliwili Yacht Club on Kauai. Fast Company’s skipper, Jim Saylor, makes it happen year in and year out – bashing 100 miles upwind in an ultralight – and everyone on Oahu applauds the effort and the aloha.
If I have just one complaint/ suggestion about the entire regatta, let’s just stop screwing Jim on his rating, can we? An Olson 30 and a Hobie 33 shouldn’t rate the same and they sailed their boat a hell of a lot better than almost straight DFL’s. Re-calculate the race results using ratings from basically any other venue in the universe and it would be a different story in many of the races. Photos thanks to Lauren Easley.
Aloha from Hawaii,
Ronnie Simpson
Main Trimmer, Hobie 33 Mayhem

the most awesomest boat in the world