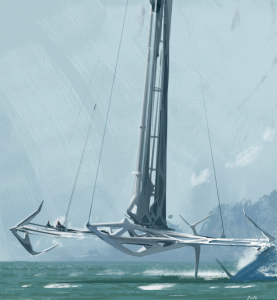 It has been quite some time since I visited the McConaghy Boats yard in Zhuhai. In fact it was as the unique motor trimaran, Adastra was nearing completion and McConaghy Manging Director Mark Evans reminded me that visit must have been in 2011. That Shuttleworth design with Strompf-Jensen interior design looks just as futuristic now as it did when launched 6 years ago. She is worth googling, you will not have seen anything quite like her, I promise.
In the intervening period McConaghy in China hasn’t just survived, I have to say they have bloomed. They now occupy 5 huge sheds in Zhuhai and contrary to tales that quality can only be assured in Chinese boat building with a massive foreign staff, the yard only has two non-Chinese employees.
Had we got there the day before we would have been able to see a couple of the latest race boats they have built but they shipped just 24 hours before our visit. Multiple Kers have left this yard and ‘Made in China’ boats have played a large part in building the Fast 40 fleet in the UK but that is but a part of what they have shoved out their doors over the years.
Naturally the Chinese America’s Cup boat was built here, after all where else in China would you go for a 1st rate carbon fibre build. The TP 52 Patches was one of theirs and many will remember how successful she was.
Green Dragon, China’s first involvement with the Volvo Ocean Race also came from this yard. She is still going strong and due to reappear on a Volvo race course in the Legends Race from Gothenburg to The Hague in a couple of months. She will be joined in the race by Silk Cut, another of the Volvo boats to come from this builder.
But that is history.
Not only have 3 race boat is the 40 foot region recently been shipped but the Waspz is also keeping them busy with to date around 640 shipped which added to the 600+ Mach 2 proven to be a real money spinner for the yard.
Also lying in a shed (that’s a pretty big shed by the way, not your average garden variety) are a few dozen International 420 ‘Club’ dinghies which are still extremely popular especially on the North American College sailing circuit and various other boats such as what looked like a handful of 6 metres (which they obviously weren’t but nice all the same) and half a dozen J-70s which were all pretty much ready for delivery. 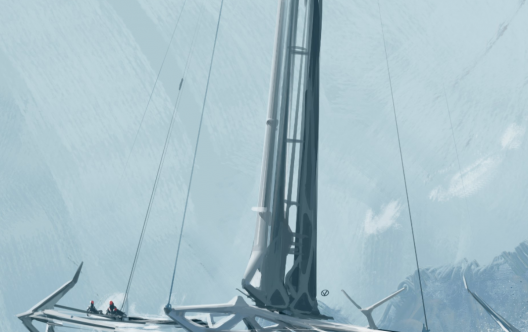 However the two, no – make that three large projects they have on the go at the moment are all multihulls. With the McConaghy 60 Catamaran looking like having healthy order books the yard has one at hull, deck and fairing stage and quite a beauty she is too. According to Mark Evans she is pitched at somewhere just below Gunboat level in terms of performance so definitely no slouch on the water. In fact a McConaghy Cat just finished 2nd on the water behind the MOD 70 Beau Geste in the recent Rolex China Sea Race.
Just behind her is a half complete 50 foot cat as well.
Dominating the Catamaran shed however is an 86 foot catamaran (an 86 foot cat, a 60 footer and a 50 foot cat in one shed – now you can imagine the size of the sheds they have).
She has an unusual history so far. She was started by Prout Catamarans which was a neighbour of McConaghy Boats but Prout went bust and the hull and deck sat for (I understand) years.
A deal was done, a client found (or the other way round) and McConaghy took on the completion of the vessel but not without firstly performing some radical and dramatic changes to the boat. From changing of the bows to the now fashionable Dreadnaught bow to an aft bathing come tender platform that will hydraulically lower to below water level to make its use so much easier and dramatic triple vertical windows set into the hull both forward and aft the boat is going through a transformation.
While Evans admits she wont be a flyer of the Ilk of Gunboat and ‘her kind but internal volume of this boat is – well, simply enormous – and easily compares to a monohull of 150-180 feet and being a multihull will take so much less both in terms of sail area or motive power to push her along.
Most definitely more of a long legged ocean crosser than a race boat she is, non the less going to be spectacular when she hits the water.
First challenge however is going to be getting her out of the building although that is not a new challenge to the McConaghy boys as the Adastra mentioned at the start of the article only escaped by having the entire wall at one end of her ‘shed’ being demolished to let her out.
Great to see a yard that through quality and hard work continuing to thrive. Long may it continue. – SS.