Sadly, for the second time in succession at Royal Hong Kong Yacht Club events I have attended I have participated in a minute of silence. 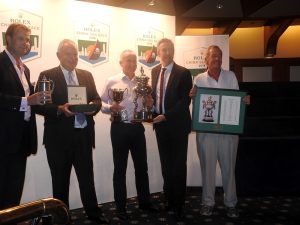 Not much more than a couple of weeks ago it was for John Fisher, this time at the Rolex China Sea Race Prizegiving at the Royal Hong Kong Yacht Club’s main clubhouse at Kellett Island it was for sad loss of former Royal Hong Kong Commodore, Mark Whitehead. At least he passed away peacefully while off watch in his bunk on Orient Express. No less of a loss for all that.
The prizegiving itself was more or less a time for congratulations to the category and class winners from the cruising division all the way up to IRC Overall. It was the sort of prizegiving that was a joy to attend.
Plenty time for plaudits, applause, receipt of the spoils and photographs without dragging it out for half the night. All done and dusted in not much over an hour – well done Royal Hong Kong organising committee and sailing office.
The two big prizes of the night, not only in terms of achievement but also as they carried, on top of the trophy, a Rolex Yachtmaster Chronograph for the winner as part of Rolex’s generous and continuing sponsorship of this event which is Asia’s premier blue water event were rightly saved to the end.
The overall line honours victory. Along with a new outright course record went to Kark Kwok’s latest Beau Geste, a MOD 70 trimaran which smashed the old record by a significant margin.
The other timepiece went to Mandrake III who acknowledged they are having their best season ever. In fact as part of a wrap up speech owner Fred Kinmonth joked he and his partners had been together longer than his marriages and that it was very pleasing to see so many younger crews and Chinese teams entering the event.
In fact hot on Mandrake’s  heels and second overall by less than 10 minutes was the mainly Mainland Chinese crew of YF Liu’s Seawolf which compared to many of the entrants is a newcomer to the sport of sailing. Perhaps this is a portent of the future with a growing number of Mainland Chinese yachts entering the race.
Who knows what 2020 and the 30th anniversary of the event will bring. – SS