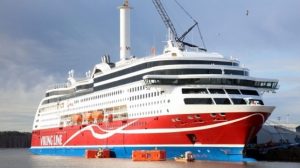 Viking Line has installed a Norsepower rotor sail unit on the cruise ferry Viking Grace, making her the world’s only working passenger vessel with a modernized Flettner rotor.
Viking says that the 80-foot-tall rotor will allow the Grace to save up to 900 tonnes of fuel annually on her run between Turku, Finland and Stockholm, Sweden. A newbuild Viking Line cruise ferry currently under construction in China will also receive two of the Norsepower rotors.
The history of the Flettner rotor dates back to 1924, when engineer Anton Flettner installed two of his newly invented rotors on the converted schooner Buckau. The Buckau showed promise, with high reliability and efficiency, but the availability of cheap fuel and the onset of the Great Depression sunk the technology’s chances at widespread adoption.
Flettner rotors depend upon an aerodynamic phenomenon known as the Magnus effect. When wind contacts a rotating cylinder, it flows at different relative speeds as it passes on each side. That speed difference translates into a pressure difference, creating force at a right angle to the wind direction – an effect similar to that of a traditional cloth sail. Unlike a sail, though, the Flettner rotor needs no furling, reefing or line-tending. The Buckau’s performance also suggested that rotor-driven ships could sail closer to the wind than traditional sailing vessels. Read on.

now you c me

pull up to the bumper