the very essence of racing 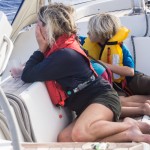 The thrill of victory and the agony of defeat all bottled into one emotion. That is our day right now in Puerto Vallarta as we wind down from an epic SD-PV Race. It you were following along then you are aware we were in a tight battle with the other J-125 all the way here. There were no moments to rest on our laurels and we knew the omly way to win was to push the boat.
At Cabo we tried a little split and went further than everyone else to try and avoid any wind shadow from the cape. After looking at Yellow Brick I can see that the other 125 jybed a few times to get back in line with us. We had over 200 miles left and were neck and neck heading for the finish. We were double head sail reaching and it was getting to the point of a spinnaker. I sold Viggo on a Fractional 5A a few years ago and we have not used it too much. I made a comment to Erik and Blake that if we get to put it up we would win. The wind came to an angle that was suitable and we threw it up. Instant speed and power.
The wind increased to about 17 and we threw a reef in the main and held about 110TWA in 16kts of wind. Pretty good at 10-12 kts of boatspeed. We pushed this set up all night with 4 on deck and two sleeping on the high side. We wanted to win. Horizon had ground us down a bit and then we left her with the 5A Frac. The morning came and we could see the two boats behind us. As the wind lightened we switched to the 1A and then 2A. It was a tough finish in light air but we managed it and finally finished the grueling race. It was such a relief and we knew we had won our class, which was our main objective.
At this point my back would no longer work and I laid down on the bow and took a breath. A few days before I had tweaked it and it went into spasms. It was a funny sight to see me come up from below for my shift and roll across the cockpit to the wheel. Laughing made it worse but it was a spectacle for sure haha. Unfortunately it made the crew a little short handed on sail changes and what not but the crew really made up for me. Thank you guys. I am sitting by the pool with the boys reflecting on it all right now.
Our only disappointment was missing out on the overall. At one point last night people were texting us saying we had the overall win and we began to believe it. That lasted until Pyewacket finished.. Those guys, what can you say? They did it again! Beat us out for the overall and pushed us into second place. Congratulations to them but wow what a heartbreak for us.
Regardless, we are pleased with the race and proud to have been in contention on the final stretch. We had a top speed of 19.8 (by yours truly) and a lot of moments on full plane in the 17kt range for extended periods. Erik timed one I was on and said we did not drop below 17 for 1 minute. Do I have to say it again… best J-Boat ever made and I am honored to be able to sail one on these kind of races.
Thanks to the crew and Viggo for the hard work and making it happen. Also thanks to Sailing Anarchy for putting out my stories and to all the people who read and follow along. Stay tuned for MEXROC updates and a whole lot more!! – Keith Magnussen.