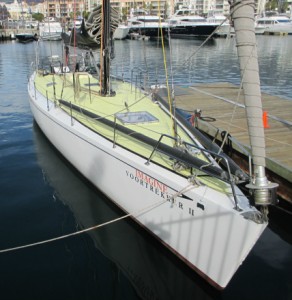 Everyone who knew Sir Durward Knowles has a different version.  But I think we’d all agree Durward never had a bad day on the water. His smile and wry sense of humor was infectious.
Bahamian Durward Knowles was already a sailing legend when we first met in Newport Beach in 1959. Knowles had been taught sailing at a young age by his father, worked as a Nassau Bar Pilot, won the Star World’s Championship in 1947 and the Bronze Medal in the 1956 Olympics. His red Starboats, all named GEM, were invariably found at the head of the fleet. Durward was in the very top echelon of Star sailors, the best in the world.
Durward and crew had arrived early in Newport that August. I was honored to be asked to practice as their tune-up boat. Unlike San Pedro, 20 miles west, where Durward had won the ’47 Worlds, the course off Newport has predominantly light airs, 8-14 knots, with a fair amount of Pacific ground swell, leftover waves from better winds to the west, and powerboat slop.
Local sailors become proficient at handling these conditions, “the washing machine,” which are somewhat mystifying at first to the outsider. As a 14 year old I had gotten good at it, which turned out to be a bit deflating to the ever jovial Mr. Knowles. As he wrote of his experience, “I didn’t mind so much that Skip kept passing us.” “But every time he wiped us off the kid would luff up and say, ‘Had enough? I have to go home.'” Durward interpreted this to mean, “Now do you give up?” whereas actually it was too late for me to be out on the ocean according to family rules and I didn’t want to get into trouble.
Durward kept his grin all that week and the next, laughing at practical jokes, one of which was an unidentified competitor, possibly named Blackaller, repainting the name of Knowles Star from GEM to “GERM.”
Durward Knowles reached the pinnacle of a lifetime of sailing in 1964 when he and Cecil Cooke won the Olympic Gold Medal in the Star Class in Tokyo. They came home to the Bahamas as national heroes, and he was knighted Sir Durward in 1996.
Read on.

love affair Some Sailor Chicks of the Week are Olympic medallists or World Champions, and some just remind us why we have such a love affair with sailing.

build me a beast