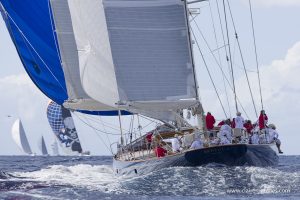 I saw online that there was a Superyacht regatta in Antigua. The eighth annual apparently. It reminded me of a funny story. I raced the first Superyacht regatta in Nantucket many years ago. So long ago in fact that the biggest boat, the one that I was racing on, was a measly 125-feet long. I recently wrote an article about a new Superyacht that has just been launched. It is 198-feet overall, had a mast that towers  216-feet and a Gennaker that is 24,000 square feet in area.   That’s larger than 11 tennis courts, but I digress. I was crew boss aboard Timoneer, a S&S design, and it was my job (with clipboard in hand) to make sure that the drinks were cold, that the owner’s wife was well attended to, and that their daughter’s every wish was carried out; and promptly.

The handicap system was rudimentary, but since we were the biggest boat in the fleet and it was a pursuit race, we were last to start. Nantucket Sound is a wonderful stretch of water for a yacht race and we took off on close reach, quickly gaining on the boats ahead. As we got closer the skipper of Timoneer, an old South African mate of mine, paged me from the ivory tower where he was overseeing the helmsman (who by the way was steering with a joystick) and asked me to go down to the galley and look in the freezer and see if I could find a large frozen fish in there. Earlier in the month, on a passage from the Caribbean to Massachusetts, they had caught a 4-foot Mahi Mahi and wrapped it up and tossed into the freezer.

I made my way down through the plush carpeted saloon, pushed a secret button  located behind the Picasso hanging on the bulkhead. The button opened a sliding door which led to the crew area where I found the freezer and the fish. I was not quite sure what the skipper had in mind but was soon to find out. I dragged the fish up on deck and noticed that the skipper was getting one of the fishing rods ready. The rods were mounted on the stern of the yacht and he motioned for me to bring the fish over.

We were still gaining on the boat ahead and as we drew alongside the skipper, having hooked the frozen Mahi Mahi onto the rod, slipped it over the side. The crew on the boat to leeward were all sitting on the windward rail but had not noticed the hi-jinks going on aboard Timoneer. The fish was now well astern of us when the skipper yelled, “look we got a fish.”  You can only imagine the looks on the faces of the crew on the other boat. They were getting overtaken, which was bad enough, but the fact that the boat overtaking them was fishing, and worse yet, catching was more than they could manage.

We ended up passing all the boats in the fleet and pulled the same stunt on all of them. We even caught the fish during a spinnaker drop at the leeward mark as we overtook two smaller boats. That evening at the prize giving the buzz was all about Timoneer and the fact that they were fishing during the race. It was only when the other crews swapped notes and realized that it could not be possible to catch a fish as we passed each and every boat that our cover was blown.

Personally I am surprised that no one noticed that the fish was frozen in a curve from being plonked in the freezer, and when it was being reeled in hardly put up a flight. You see the point of this story is that people are so easily fooled. They were more incredulous that we were fishing to notice that the fish was not only dead, but very frozen. Sadly the Superyacht regattas these days have become far too serious affairs and I am sure that if any crew tried to pull a stunt like that they would be ejected from the event. – Brian Hancock.

Photo thanks to Claire Matches