don’t judge a book by its cover 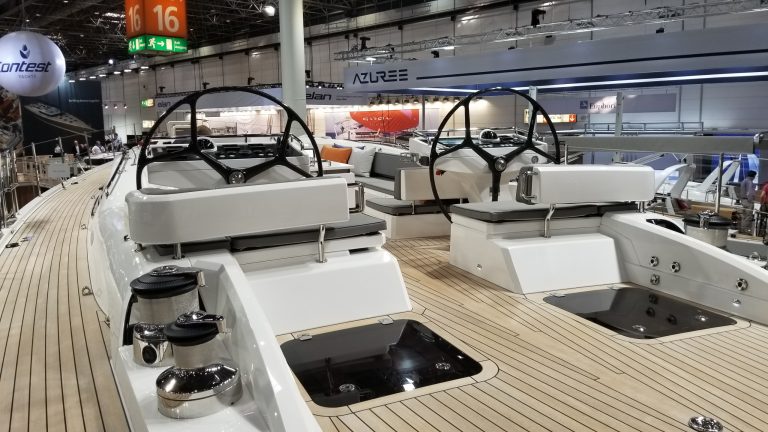 One of the more interesting parts of the Dusseldorf Boat Show was sitting down with Oyster Yachts CEO David Tydeman for a chat and a tour of their new 745, pictured here. David is a man with decades of experience in this sport and during our conversation shared that they had something like $70 million in orders on the books. To get a 745, not only would it set you back about $5 million, but you would looking well into 2019 before you could even think about getting one. How’s this for a cockpit?

The picture he painted was that the company was very satisfied to be where they were, and had eyes forward on projects like the 118′ Reichel/Pugh beauty of which he thought perhaps two orders were about to close. So it came as a shock when the news came out about their huge financial issues.

I spoke with David on the phone and he of course was strunned and reticent to say much other than the withdrawal of their financial backer, HTP Investments did them in. We don’t know the full story, but without question, the 400 employees who are loosing their jobs, and the people with boats on order and under build are the ones who are going to feel this immediately. Here is the report:

The British luxury yacht builder Oyster Yachts is reported to have gone into liquidation as of 1600 on Monday 5 February 2018. Staff are said to have found out that all employees are to be made redundant in the news this afternoon. A spokesman for the company confirmed that a statement would be made on Tuesday 6 Feb but would not confirm or comment on the news. Staff have been asked to come into work tomorrow

Oyster Yachts recently launched their new model, the Oyster 745 at boot Düsseldorf, the German Boat Show at the end of January. Sources have said that 160 staff at the Southampton boatyard have been told they will be losing their jobs.

Oyster recently had the biggest sailing yacht on show at international Dusseldorf boat show but is rumoured to have gone into liquidation, with the doors closing today at their Southampton yard.

Recently embarking on a major project to build several 118ft superyachts, boosting jobs in the area, the quintessentially British brand announced an order book in excess of £80m worth of business only a few months ago. The company recently published the progress of some new moulds for their Oyster 825 and 895 models. Read on. Jump in the discussion thread here.