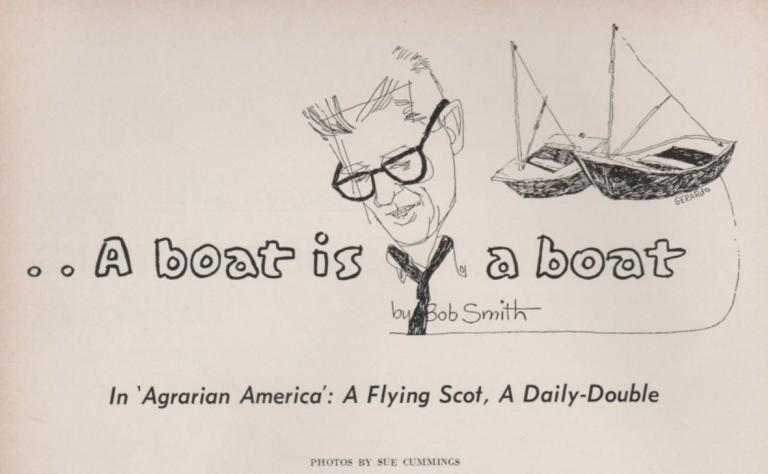 UPDATE: SW Editor Dave Reed wrote to dispute some of our reporting, and as we’ve always told all of our critics, we’ll always print reader feedback…especially for someone like Dave who’s been reading SA since the beginning. We insert Reed’s comments and our responses following the original article, and we remind all of our readers that we have zero animosity towards Sailing World – in fact it fed our passion for decades – but we struggle to understand how anyone can positively spin a mag that’s gone from 12 to 4 issues in a decade or a racing series that’s gone from 9 to 5 events over the same period of time.  Our opinions of the quality of the magazine aren’t really relevant – it’s just math.

While news of Sailing World’s imminent death are greatly exaggerated, we’ve confirmed widespread rumors last month that the world’s oldest yacht and dinghy racing magazine has suffered yet more personnel and edition losses, and it’ll be difficult to find a good way forward for the publication that was once required reading for any racing sailor.  Launched more than half a century ago as One Design Yachtsmen Magazine and later becoming One Design & Offshore Yachtsman, the magazine reigned supreme over everything else for decades, producing great journalism from the best sailors of the day and some of the most exciting writing the sport has ever seen.

The past decade saw Sailing World fall victim to the same changes that have killed off so many paper-based pubs, but the magazine held on by the skin of its teeth thanks to its long history: 12 annual issues became 10, then 8, and then 6, and each year we saw more advertising and less content on the colorful pages, while the marquee event for the magazine – the NOOD Regattas – contracted or disappeared on a similar timeline.  Meanwhile, the digital strategy was mostly “reprint lots of press releases” while their social channels seem to be populated almost entirely with paid-for followers.

As of last month, Sailing World only has one employee left on its roster, and that’s longtime Editor-In-Chief Dave Reed.  He told us this morning that SW will now contract to four issues per year, but as most of SW’s content comes either from Reed or from freelance contributors, little else would change.  Reed says things should be pretty stable after that, but we doubt it.  The company’s history and trends would suggest that it’ll be two years until there are only two Sailing Worlds per year, if there are any left at all.

Sailing World’s response and our comments

Reed: We have a strict ad/edit ratio that in my lifetime has always fallen to the side to favor edit. I would know because I approve the ratio with every issue.”

Reed: The NOOD regattas are doing just fine.  In fact, 180 boats registered for St. Petersburg next week; from J/88s to Melges 24s, and A Cats. Annapolis is at capacity. Helly Hansen is very happy with how it’s going.

SA: In 2005, there were 9 NOOD regattas with some 2000 competing boats.  Now there are 5 with around 900 boats.  We’ll let our readers do the math on how fine the NOOD is.  Helly Hansen had light expectations after Sperry gave you the flick…

Reed:  [Regarding digital strategy/press releases,] wrong again. There has always been a blend of From the Experts, original content, boats, gear, etc., with a strategic plan that works for us and our advertisers. Very little cut and paste.

Reed: Paid for followers? Where you’d get that? News to me. Do you have this as fact?

SA: In 2015 We watched Sailing World go from under 20,000 followers to more than 150,000 while the page itself was largely stale, and SW’s Facebook community is extremely under-active (and has a huge Eastern european base).  Again, we’ll let the readers decide whether a niche magazine with 20,000 subscribers suddenly exploded on the social media scene with real content and honest growth, or if you just dropped some cash on the problem…

Reed: Instagram? I don’t know. I looked now and SA has 1,641k followers and 11 posts. Hey! Look. SailingWorldMag has 85K.
SA: Word. You got a nice IG page. We just got ours back from a cybersquatter.  You win this round.
Reed: Our weekly email list 25k with 1/3 open rates. How’s yours?
SA: Email…Cool.  You got bingo too?
Tags:publicationsailing world
adminFebruary 2, 2018
Leave a reply