bring on the dancing girls

Our 2017/18 Volvo Ocean Race coverage is presented by Musto, Official Apparel Provider of the VOR. 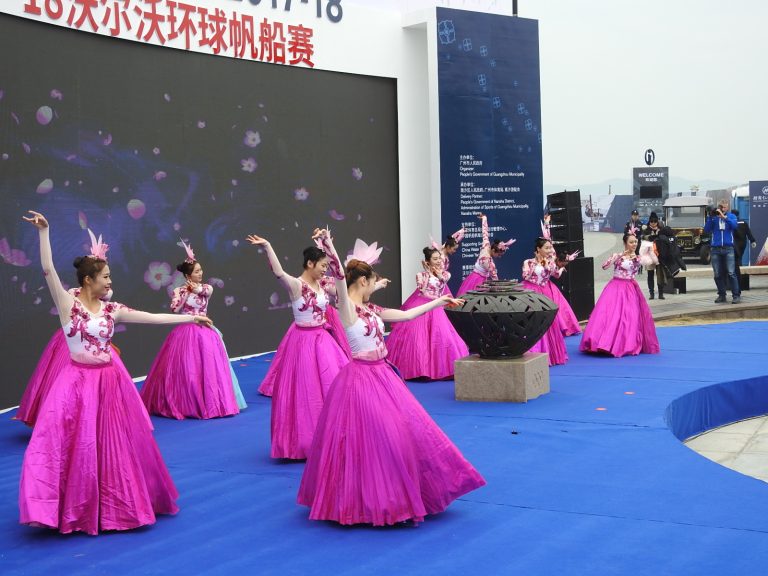 Walking into the Guangzhou Stopover, even though early this morning there was a feeling of expectation with a ‘village’ like ambience some other stopovers might learn from. Clearly Guangzhou City Government, Nansha Marina and Volvo Ocean Race, China have worked hard to make this more than, what some have called, a “side show”.

As the day progressed I almost had to check my calendar to see this was not a mid-week day and goodness knows what is going to happen at the weekends because it was busy with a capital ‘B’, and with grown-ups too.

The whole event kicked off with the usual Opening Ceremony but this one had Royalty in attendance. Prince & Princess Michael of Kent were there in Prince Michael’s capacity as Admiral of the Royal Southampton Yacht Club (RSYC) and as part of the celebrations a strategic partnership and reciprocality was announced between RSYC and Nansha Marina Yacht Club, another small example of how the Volvo Ocean Race can build bridges and help sailing in the developing (in sailing terms) world.

The usual speechifying preceded the lighting of the event torch which brought a bit of warmth to an afternoon where the temperature was kept cool by a chilly North East breeze along with the usual veritable queue of people wanting to take their selfies alongside the Olympic like flame.

Then to the main event as the teams and their boats were announced one by one as they entered the marina. Naturally the loudest cheer as reserved for home town favourites, Dongfeng Race Team entered their slip with cries of Dongfeng JaiYou echoing round the place but fair dos to the assembled crowd nobody was left out in the massed welcome.

The DFRT sponsors had a large presence, even more than race organisers Volvo but sadly the other teams didn’t appear to have pavilions at all. This struck me as strange as there is not a single team sponsor in the race that doesn’t have business interests in China OR with China being the most populous country in the world an important message to tell. Even the Volvo Ocean Race, largely owned by Chinese concerns didn’t appear to place a great deal of importance on this stop in China.

Apart from that this ‘side show’ has pretty much everything else a VOR stopover would have with one special unique addition but I shall deal with that separately.

and then there were six

no coke for you