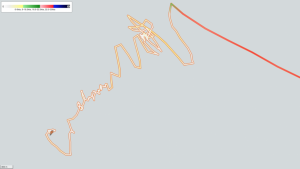 Our Volvo Ocean Race coverage is brought to you by Musto, Official Apparel Provider for the 2017/18 VOR.
The Anarchists have been swarming over Vestas 11th Hour Racing’s debacle just a few miles from Hong Kong since around 8 hours ago, when, in the middle of the night at 20 knots of boatspeed in 20 knots of wind, they collided with and sunk what’s been reported as a commercial fishing boat.  The forums were on fire with analysis of what appeared to be Vestas sailing a search pattern and then drifting downwind on the VOR tracker and now we know why: 29 minutes ago (a full 8 hours after the first inkling something was up), Volvo HQ posted this statement:

The Volvo Ocean Race can confirm Vestas 11th Hour Racing…has been involved in a collision with a non-race vessel before the finish of Leg 4, near Hong Kong.  The team has retired from Leg 4 and is proceeding to Hong Kong unassisted and under its own power.

Race Control at Volvo Ocean Race headquarters was informed of the collision by the team moments after it happened at approximately 17:39 UTC on Friday January 19, 2018 (01:39 local time on Saturday morning).
The Vestas 11th Hour Racing team issued a Mayday distress call on behalf of the other vessel, alerting the Hong Kong Marine Rescue Coordination Centre (HKMRCC) and undertook a search and rescue mission.
HKMRCC has informed Race Control that a commercial vessel in the area was able to rescue nine of the crew and that a tenth crew member was taken by helicopter to hospital.
All of the crew on Vestas 11th Hour Racing are safe. Their boat suffered damage and the team has officially retired from the leg, but the team is able to motor to shore.

There’s no suggestion yet about what exactly happened, and with the severity of the injury of the airlifted fisherman still a mystery, it’s going to be a long, long morning for replacement skipper Mark Towill and his team.  From a competition standpoint, the RET is going to be a brutal blow to a team that just half a day ago had a lock on 2nd place over the line into Hong Kong and overall for the race.   For a sponsor still not entirely over the shattering shipwreck of the 14/15 race, this is definitely going to hurt.
There’s nowhere quite like Ocean Racing Anarchy when tragedy strikes the Volvo, especially when the ‘official word’ is almost nonexistent. Go there and learn the latest.