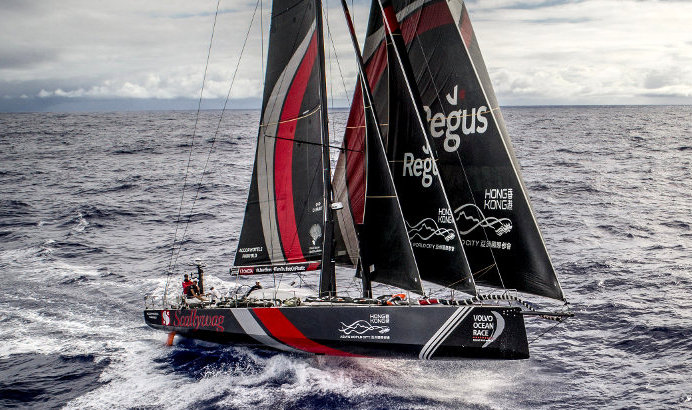 What can’t Brian Hancock complain about?
Like many other sailors out there I have become a tad obsessed with the Volvo Ocean Race tracker especially at the start and finish of each leg. And I confess that in the last few days I have been keeping a close eye on the Hong Kong entry Team Sun Hung Kai/Scallywag. Some that read my stuff on a regular basis will know that I am not a big fan of David Witt, the skipper, although I have never met him and he may indeed be a great guy in person.
I took exception to his comments about having women on board. He was originally against it not wanting to, as he put it, “participate in some kind of social experiment.” He has since had a change of heart and now there are two female sailors racing on board the good ship Scallywag. Annemieke Bes who has been there since the start, and more recently Libby Greenhalgh who replaced Steve Hayle as navigator.
So it was with mixed emotions that I watched Team Sun Hung Kai/Scallywag take line honors on the fourth leg into Hong Kong. There are, however, two things that I am happy about. I am happy that the local team won the leg that finished in their home port. It’s brutally hard to get sponsorship for an entry in the Volvo Ocean Race and I am sure that the people of Hong Kong will be more than chuffed that their local team was first across the line. I am also happy that the navigator was a female. Libby Greenhalgh is a very experienced sailor and I feel certain that their win was in no small part due to her experience and input.
Having said all that I hate to say what I am going to say next, but their win was pure dumb luck. The Scallywag crew were trailing the fleet for most of the leg. Maybe that was their strategy, but I doubt it. Being so far behind as the front runners approached the doldrums was a very nice gift. They were able to see the leaders sail into a hole, a total windless zone, and they sailed around all the other boats that were drifting aimlessly in circles. It must have been hell on board the leading boats to see the last place boat (by far) tack off in a different direction and do an end-run around the whole fleet.
But that’s sailing isn’t it? When sailing downwind the boats from behind bring the new breeze with them and the gap closes. Same goes for sailing upwind. The leading boats get into the new breeze first and leg out. We have all dealt with these kind of fluctuations, but seriously, have you ever seen the dead last boat catapult into first place in such a spectacular way? You can’t take anything away from them either. They played the cards that they were dealt and played them masterfully. I just hope that Mr. Witt gives his navigator credit where credit is due and does not grab all the attention for himself.
– Brian Hancock