curse of the spindrift 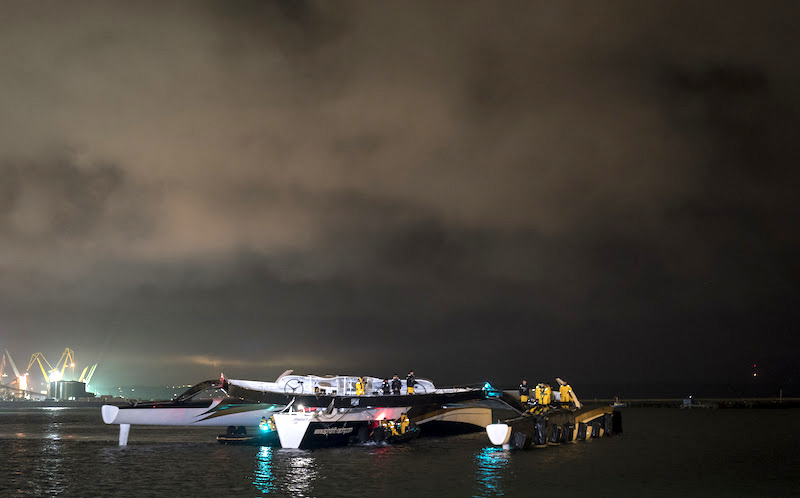 We’re not suspicious types, but it’s hard to keep calling it ‘coincidence’ when a yacht seems downright cursed.  Ever since the blue Banque Pop colors were replaced with the black and gold Spindrift livery, the former Jules Verne-owning Spindrift has gone from one catastrophe to another.
The boat has seen broken bit-ending record runs, an awful injury (and criminal charges) from a collision with a RIB, and one failed or barely started round-the-world effort after another, and as of an hour ago, she’s just dismasted on the way to yet another Jules Verne attempt.
Yann Guichard, skipper of the Maxi Spindrift 2 said: “The crew is safe and sound. Everything happened so fast. The mast fell to the leeward of the boat. The conditions were not so extreme. It’s too early to know exactly what happened. We had to drop the rigging to save the boat and prepare it for towing.  Operations are currently underway to recover it.”
Here’s the problem: The next generation of bit RTW trimarans is much, much quicker than Spindrift’s generation, and now that she’s lost a million-dollar mast, doesn’t it make more sense for the Dona Bertarelli-funded team to just buy or build a new one?
It has to be more successful than the old – or at least, less cursed… Picture thanks to Chris Schmid / Spindrift racing.