yo, stop frontin' and use ya head 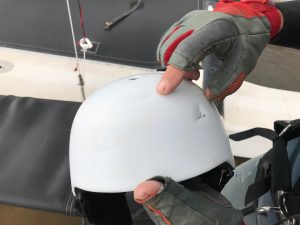 Sunday is race day here at the Southern Highlands Sailing Club in NSW south of Sydney. Mixed fleet Commodores Cup today, Mono’s and Multihulls, with Nacras, Spirals, Lasers, a Tornado, A-Class and plenty of Hobies. I race a Finn, one of two here at the club, and it was a windy and very shifty day, gusting to 30 knots, where I had two breakfasts before racing – and should have had two more…
The cool southwesterly breeze kept shifting dramatically all afternoon, filling in then dropping – so you would be hiking hard one minute, then jumping into the centre of the boat in a 40 degree knock, to steady the boat and get an idea what was going to hit you next.
Just before launching, one of the guys on a Hobie 17 ran back to his car and grabbed his helmet – a $30 bit of kit which he bought at a nearby supermarket that sells sporting stuff in aisle three – and boy was he glad he did so. He is a good sailor, but in one of the big shifts he got a smack on the helmet from the boom, which made everyone stop and think when he showed us in between races. We are seeing more and more sailors in the club heading out wearing a lightweight helmet when its breezy – and when I was in Europe last year staying with friends, their young son showed me a plastic domed insert that fitted inside his baseball cap, which he always sailed with – have you seen those? Any protection looks like a smart move to me. – Blue Robinson.
Title inspiration is a stretch from Schooly D –ed