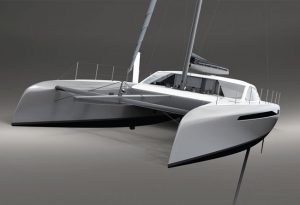 Sailing upwind at a true wind angle (TWA) of 50° in light air, then bearing off and accelerating to 15-16kt, still in no more than 12kt of true wind… These are typical performance prediction figures from the designers of the latest Gunboat and the first of its kind to emerge from its new French builders. And reaching in a good ‘working breeze’, VPLP’s Xavier Guilbaud is confident you will often see 25kt with additional potential to be realised under the big rig option. Not bad for a boat as luxurious as this?
Pictured: Very tangy indeed… the new French designed and built Gunboat 68 further advances the aesthetic and performance development that these large cats kicked off when they first appeared soon after the millennium. The very first Morrelli and Melvin designed Gunboat 62 Tribe marked the beginning of the end in the luxury sector of the market for those giant sailing caravans that were fine for reaching around the Caribbean but ‘unduly’ dependent on Captain Donkey for going in other directions…
The launch of the first Gunboat Tribe 17 years ago marked the invention of a new sailing concept: the long-range high-performance but luxurious, large multihull, a combination only made possible through borrowing the best race boat technologies and materials.
The original Gunboat catamarans designed by Morrelli and Melvin were light and quite purist in form and with a relatively more minimalistic internal fit-out. Read on.

that's what i think