is the russian submarine finally sunk? 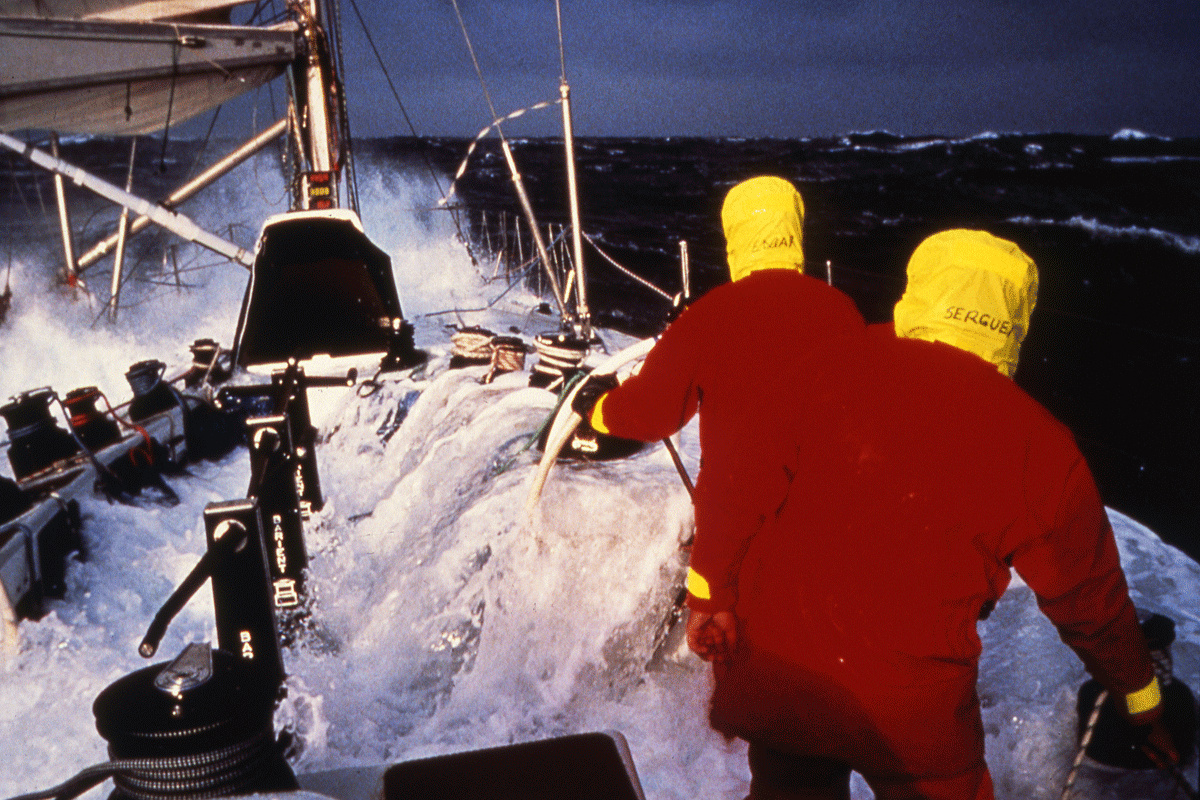 When she was first launched there was a saying going around, “Fazisi, it ain’t easy,” and I guess it was prophetic as the iconic Soviet yacht was recently spotted on a barge being hauled to points unknown. Fazisi was one of hundreds of yachts that were washed ashore as Hurricane Irma slammed its way across the Caribbean. The boat was badly beached and battered and I wonder if this time it’s finally broken.
I have a special place in my heart for Fazisi. You see back in ’89 I was minding my own business raising a daughter living on Cape Cod when my old mate Skip Novak called me. I had heard that Skip had found his way into a co-skipper position on the very first, and by happenstance, last Soviet Union entry in the Whitbread Round the World Race. He and one other non-Soviet were going to race an untested boat with an untrained crew around the world.
Not surprisingly the wife of the other non-Soviet put her foot down – she was pregnant after all – and he was off the boat. Skip asked, “what are you doing for the next month? I need to you race with us to Uruguay.” I stared at the receiver to see if I had heard correctly, stammered that I would, left a note on the refrigerator for my wife (who was away at a Trade Show), dropped my daughter at her Grandparents and hopped the next plane to London.
Fazisi was designed by Vlad Murnikov, a Moscow based architect who, having had minimal exposure to modern sailboats (back then the Soviet Union was well behind the Iron Curtain), came up with a design that was so radically different from anything else out there. The winner of the Whitbread that year was the Farr designed Steinlager, a massive ketch that was heavy and powered buy an enormous sail plan. Fazisi, by contrast, was low slung, narrow, light and somewhat banana shaped. It had been built by a volunteer team of non-boatbuilders in a shed in the town of Poti on the Georgia coast in the southern part of the Soviet Union. Like most Soviet projects in those days the boat was late and they ended up loading it in the back of an Antonov cargo plane and flying it to Heathrow. They trucked it to Southampton and that’s where I joined it less than 24 hours before the start of the race. When we left the dock the following morning the London bookmakers were giving us 100:1 odds against making the start line, let alone the finish.
It turned out that Fazisi was ahead of her time. I predict that had Murnikov and his team had a budget half as much as Steinlager’s, and had Peter’s Blake and his crack crew sailed Fazisi rather than Steinlager, that Fazisi would have won the race that year. As it was the boat finished a very respectable 11th in a fleet of 15 in the maxi-boat class. Fazisi quickly coined its nickname of “The Russian Submarine” as the low freeboard made for a wet and wild ride. I remember one night running hard downwind off the coast of Brazil, kite up, bow down, and the boat fully submerged after each 30+ knot surf. It was wet and wild and pretty damn stupid but that was how we ran back then; pretty damn stupid.
The boat never returned to the Soviet Union, in fact the Soviet Union was no more, it had collapsed while the race was on. I formed a partnership with Vlad and we chartered the boat from the owners for $1. We brought it back to the US on a Goodwill Tour that was designed to raise the potential of a joint US/Soviet entry in the 93/94 Whitbread. You can only imagine what we looked like sailing in Boston Harbor on the July 4th weekend sporting a big Hammer and Sickle ensign off the transom. We funded the tour selling T-Shirts that read “The Russians Are Coming” and we sweetened each T-shirt sale with a shot of ice cold Russian vodka. They flew off the shelf, figuratively speaking.
Vlad and I were unsuccessful in our effort to put together a campaign in part because my marriage was falling apart. I guess that note left on the fridge was a step too far. Fazisi was sold and since then has had numerous owners, most recently The Polish Sailing Club of New York. I am not  sure who owns the boat now but it’s sad to see her in such a compromised state. Among other tragedies linked to Fazisi was the suicide of Skip Novak’s co-skipper, Alexei Grishenko, who hanged himself shortly after we arrived in Uruguay, as well as a grounding two years ago when the boat lost its mooring near Brooklyn, New York. Fazisi survived that disaster but I guess the big question is, what will happen to her now?  – Brian Hancock.
(Here’s what will happen to her. – ed).  There is a good discussion thread happening

how not to do it