that's a lot of blow 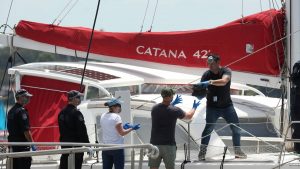 After months of surveillance, state and federal police swooped on a 14-metre twin-hull yacht moored in Catalina Bay on Wednesday.
On board was Mr Bath, a 68-year-old from Broadmeadow. And after the yacht was towed back to a wharf at Toronto, and Mr Bath placed in handcuffs and taken into custody, the officers allegedly found what they were looking for.
Hidden deep in the bow of both hulls were scores of tightly wrapped bricks which authorities say amounted to more than 700kg of cocaine with an estimated street value of $245million. The haul was so big it took a line of officers more than 30 minutes to unload the bricks in front of bemused locals on the Toronto foreshore on Thursday.
Police will allege they began watching the trio after information came from the Australian Criminal Intelligence Commission, formed last year to bring together the Australian Crime Commission and CrimTrac.
Read on.

back to the future