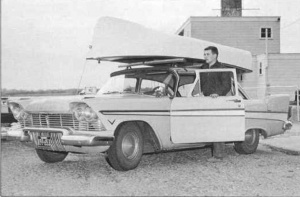 Now that the Godfather of Fiberglass has died, it will have to be Ensign, Pacer, Triton, J/24 and literally thousands of other racing and cruising boats  who will forever carry his legacy to ports throughout the world.  Our thoughts to the friends and family of legendary boatbuilder Everett Pearson.  Full obit here, and share your favorite Pearson boats and stories in the thread.

Everett A. Pearson, age 84, of Warren, RI and Estero, FL, passed away Sunday, December 24, 2017, in the Hope Hospice Center in Providence surrounded by his loving family. He was the husband of Virginia Bourne Pearson, to whom he had been married for 62 years.
Born in Pawtucket, he was the son of the late Peter S. and Elin M. (Larson) Pearson. Everett was a graduate of Pawtucket East High School, received his Bachelor’s Degree in Economics in 1955 from Brown University, where he was Captain of the Football Team and later a member of the Brown University Athletic Hall of Fame.
Mr. Pearson was the co-founder of Pearson Yachts, the first company to build production fiberglass boats, earning him the title “grandfather of fiberglass production.” In 1968, he continued his boatbuilding and fiberglass work with the start of Tillotson-Pearson Inc. (TPI). TPI built wind blades, all-composite bus bodies, test track vehicles for Disney Imagineering, the branches on the Animal Kingdom Tree of Life, numerous other products, and the most well-known, J Boats. He received the Lifetime Achievement Award for his creative work with composites from the National Fabricator’s Association. Later in life he continued running SwimEx and started Pearson Pilings.
An avid sailor, he competed in local yacht club and ocean racing, and was a member of the New York Yacht Club. He also enjoyed tennis and in later years playing golf at Wildcat Run Golf and Country Club in Estero, FL.
In addition to his wife, he is survived by three children, Mark E. Pearson and his wife, Tracy, of Warren, Suzanne P. Vaughan and her husband, Daniel, of Plymouth, MA, and Sandra L. Marston and her husband, Thomas, of S. Bethlehem, NY; eight grandchildren (Kelly, Hannah, Nicholas, Amanda, Peter, Ellen, Emily and Everett), and many nieces and nephews.

2 star or not to star