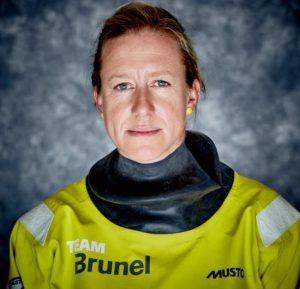 I saw on this website that Annie Lush, one of two women racing aboard Team Brunel, was injured when she and Peter Burling (remember him?) were washed into the aft guardrails by an errant wave. Burling was fine but Annie was in very real pain. “It felt like one of the wires had done something inside,” she said. “I had a big pain in my right hand side and couldn’t really move my right leg and I really needed to get off deck because we needed to gybe for the ice gate.” She continued, “I tried to crawl but in the end the guys had to drag me along the deck and then carry me downstairs.” The video can be seen here.
OK it’s a gripping account but there are two things wrong with this. Sadly, first there is going to be the usual backlash against women on boats. There will be Zac from Muskogie, Michigan decrying the day women were ever let into the Volvo Ocean Race, a place for men only. There will be those saying that women are not tough enough for this kind of sailing and there will be those defending women on boats. Ok fine, that’s bound to happen but I think that the second thing wrong with this is a much more important story. There is no need for the boats to be designed the way they are. These are crap boats and wrong for this race and we will be lucky if there are not many more injuries like this before the race is over.
So I have opened myself up to a lot of hate mail and I don’t care. Personally I am sick and tired of seeing icy cold green water cascading down the deck into the crew hanging on for dear life back aft. It was fun the first few times but seriously. Enough. It’s not necessary. The slogan for the Volvo Ocean Race is, and I think still is but I am not sure, “Life at the Extreme” but the extreme is caused by racing around the world in the wrong boats. It’s totally unnecessary.
The day I lost interest in the Volvo was when a full crew of crack sailors, the very best in the world pushed as hard as they could and managed a new world record, a 24-hour run of 540 miles. Impressive. That was until British sailor Alex Thomson, all alone of a boat five feet shorter clocked 535.34 miles. Do you get my point? Innovation was (and for now still is) not a part of the Volvo Ocean Race’s vocabulary. The race is heralded as the premier offshore ocean race; I think not.
Here is how things can quickly go wrong. Many will remember the Chay Blyth’s Global Challenge race. It was billed as the toughest sporting event on the planet and it was. It was a race around the world against the prevailing winds. A long, long *^%*# beat upwind in the Southern Ocean. Many amateur sailors paid a lot of money to be a part of the event and I agree; that’s a tough race and I, personally, would not have been up to the task.
But here’s what happened. Dee Caffari, currently the skipper of ‘Turn the Tide on Plastic’ in the Volvo Ocean Race, skippered a boat in the 2004 race. She was young, attractive and very, very competent. When the race was over she got sponsorship from the insurance company Aviva and chartered one of the Global Challenge boats to take on the challenge of sailing around the world, solo, nonstop against the prevailing winds. On May 18, 2006 after 178 days at sea she closed the loop and in doing so sounded the death knell of the Global Challenge. I mean how tough could the race really be when a pretty 33 year old woman managed to do the whole thing, all by herself, and didn’t even stop along the way?
The Volvo Ocean Race needs to remain relevant. It is an awesome idea, an around the world yacht race, how cool?  But there has to be innovation. I am not sure where things stand with the new design put forth by Mark Turner, ex CEO of the event, but I am hoping beyond hope that something is done. The current VOR 65’s are slab sided, plumb bowed and boring. Yes we all know that sailing can be a wet sport but there is no need for it to be that wet; and dangerous. – Brian Hancock.