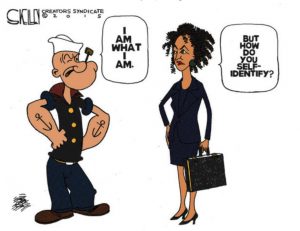 Confused about the establishment of a new class as a negotiating tactic?  Wondering about the Sunfish’s battle with the universally loathed LaserPerformance (LP)?  Read on for the latest letter from the Sunfish Class President, who once again calls out LP for allegedly making shit up again, but first, a summary of the situation from long-timer ’tillerman’ (with credit for the cartoon here):

It’s all very simple.
ISCA is the old Sunfish class but they are not allowed to use the word Sunfish and may not even be allowed to use the acronym ISCA. They have gazillions of members but zero dollars support from the builder. They are allowed to run World Championships but are not allowed to call them Sunfish World Championships.
ISCO is the new Sunfish class and they are allowed to use the word Sunfish. They have zero members but a gazillion dollars of support from the builders. They are not allowed by World Sailing to run World Championships but probably will anyway.
Members of ISCA have sworn a blood oath never to go within 100 miles of an ISCO regatta, or even refer to ISCO as a class. It’s traditional for ISCA members to drink a shot and make a derogatory comment every time the letters I, S, C and O appear in that order anywhere on social media. Nobody knows what ISCO members think about all this because there aren’t any ISCO members.
LaserPerformance is the only builder of Sunfish which is why everybody hates them.
The only thing that everyone agrees to is that Sunfish are way better than Lasers.

And here’s today’s letter from the real Sunfish Class:

Dear ISCA Members and Supporters:
Yesterday, Laser Performance (LP) made an announcement that they had invited ISCA and World Sailing to attend a “town hall” meeting in New York City to discuss the issues between ISCA and LP. Please know that ISCA and WS have NOT agreed to a town hall style meeting. ISCA informed LP on multiple occasions that the class was not interested in a town hall meeting.
ISCA did however agree to a January 8th, 2018 meeting, with World Sailing and several ISCA World Council members, in order to try to reach an agreement. Once again, LP has chosen to announce the town hall meeting anyway.
As your President I want to make you all aware of the facts. World Sailing has clearly stated that ISCA is the only recognized Class Association allowed to organize the World Championships. World Sailing will not recognize ISCO. Consequently, there is no reason for a town hall meeting.
ISCA has agreed to sign a new World Sailing agreement that will cover the availability of parts, builder responsibilities, class responsibilities and any licensing agreement that LP/Velum may want. This is the same agreement that other World Sailing recognized International Classes have signed with their manufacturers. ISCA agreed to meet LP in NYC on January 8th to go over this agreement and to discuss any other issues that the two parties might have. World Sailing agreed to attend the meeting to mediate this meeting only.
ISCA is more than willing to allow LP to protect what is theirs, however we are not willing to give ‘ISCA’, (which belongs to all the class members) to LP simply because they demand it. ISCA’s goal is to continue to provide outstanding, world caliber, one-design singlehanded dinghy racing, with equal equipment that is readily available to all competitors. Rest assured, that ISCA will continue to work for all class members, to make this happen.
Laurence H. Mass ISCA President