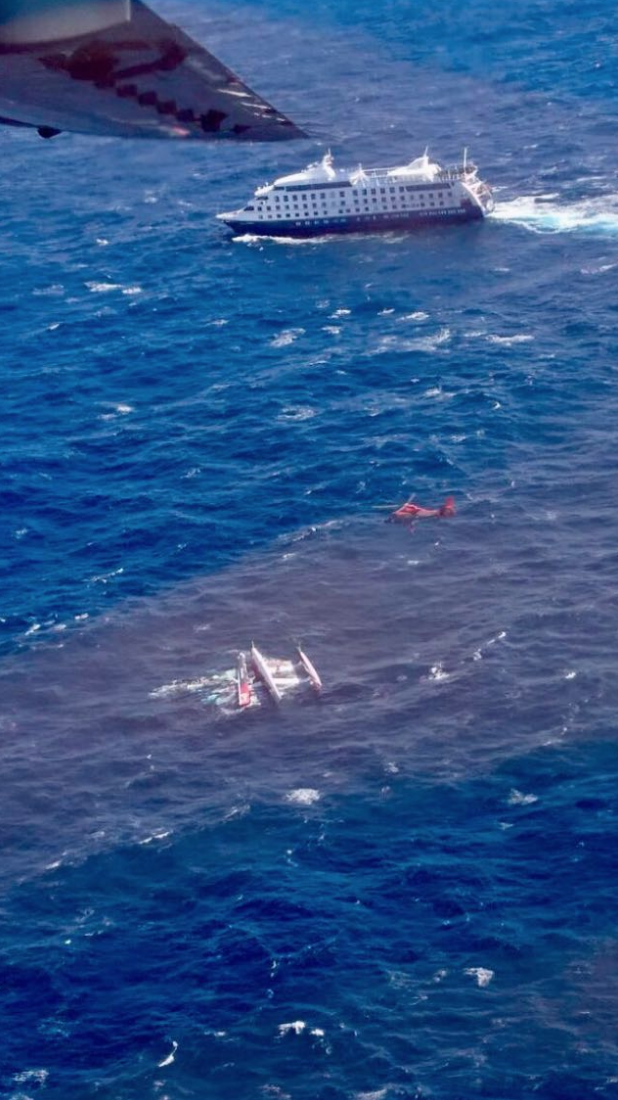 Clean Report
Shortly after rounding Cape Horn is his wrong-way circumnavigation attempt in the Nigel Irens-designed Ultim Actual (née Sodebo), Yves Le Blevec’s big trimaran found itself in 50-70 knots of Southern Ocean breeze and 5-7 metre waves, and something had to give.  It turns out that the big boat had the same weakness her sistership did; the beams couldn’t take the punishment, and when one of them broke, the trimaran capsized.
Fortunately the Chilean Navy and the cruise ship Stella Australis were around to help, and as you can see from the picture to the left, Le Blevec is safe and sound.  We’ll have more below, but this is a good time to point out just how cursed these Irens 100s seem to be.  Despite a narrow, conservative design specifically tailored for solo sailing, all three sisterships have now behaved very, very badly, with one death to count between them and a couple more that could easily have gone that way. Let’s look at each of them:
Gavignet’s Oman Air Majan was built off the molds for IDEC 2 and Sodebo to become the progenitor of the Arabian 100 one-design trimaran fleet.  After snapping a beam, Gavignet was plucked off the bent deck by a commercial ship and dropped off in Europe.
Francis Joyon’s RTW-record crushing Irens 100 IDEC 2 went on to Chinese ownership as China Qingdao under management of Volvo Ocean Race vet (Green Dragon) and record-breaking Chinese solo sailor Guo Chuan.  Chuan disappeared halfway into his Pacific solo record attempt last year, and the empty yacht was recovered a few months later.
Now Le Blevec is sitting in Punta Arenas while his shore team work on salvage.
Maybe it is better to just let these cursed boats die?
More info in the thread here, and official news from the Actual record attempt site.
The whole News team warmly thanks the CROSS Gris Nez, the MRCC of Chile and the crew of the Stella Australis, baffled to rescue Yves le Blevec, for their responsiveness and efficiency.
After the emotions of the first hours and the rescue of Yves, the time is of course also looking for explanations, because nothing was left to fear such events last night, when Yves doubled the hard way. He mastered the situation, sailing lightly (3 reefs, tormentin) in the weather conditions that had been estimated by his router, Christian Dumard, namely 30 knots of wind, gusts, and 5 to 6 meters of hollow.
Now that Yves is safe on the ground, the technical team is going to tackle the issue of trimaran salvage.
Given the incredibly bad luck that both of the big Irens trimarans have had
The reaction of Samuel TUAL, President of Groupe Actual  : “It is a great disappointment to the size of the challenge that we tried to achieve with Yves. I am sad for Yves and the employees of Groupe Actual who were all behind him. We knew it was going to be difficult, but I salute Yves’ audacity and courage for trying. This test does not detract from our determination to meet challenges. We continue to learn and grow, and we stay the course. “