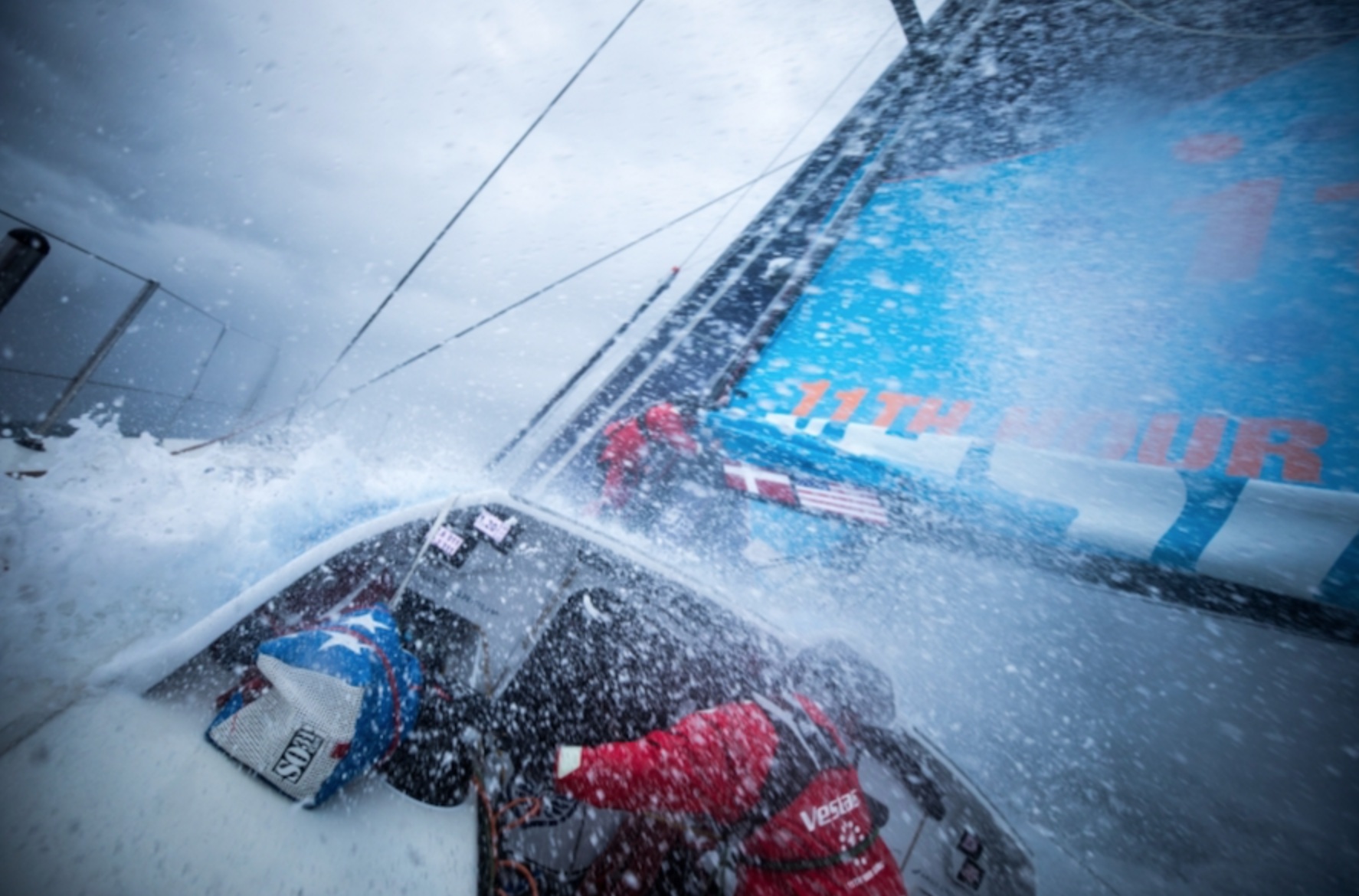 With 55 knots already over the deck on leader Dongfeng, the monster Southern low is on the Volvo fleet.  Here’s today’s Live Show with analysis from former VOR navigator Libby Greenhalgh and call-ins from Dongfeng and the much more northerly Plastic, and if you want to chat about the very latest action as the storm barrels through 7 well-prepared ocean racing teams, here’s the place to do it.
The shot above is from Sam Greenfield aboard Vestas, and below is Sam’s morning blog (and his writing is getting almost as good as hit filmmaking).
It’s 7:15 UTC time and the sched has just come through. Only God – or a kid with Google Earth on their tablet – knows what time it really is for us as the sun sets and rises earlier each day as we chase east at the bottom of the world. Imagine sunrises around 2am and sunsets around 5pm.
The wind is up as the storm builds. We’re leaping off waves at speeds in the mid 20s (knots) but the downwind angle is easier to stomach than anticipated.
Charlie is finishing up his chicken a la king with extra sweet and spicy sauce at the nav desk. Mark is perching right behind me with the same dish, coated in BBQ sauce. Both smell amazing. I strike up a deal with Charlie, telling him I’ll wash his bowl if he gives me a few good lines about the most recent position report. I’m starving anyway and need a bowl for dinner, so it’s a fair trade.
He starts out with “Weeeee’re, back in touch…. and ready to strike.”
Not good enough, I tell him. It’s the 3rd time he’s tried this line in four days and I have to remind him we’re not living in – sadly – Top Gun.
“After a … errrr… slow start and…” He pauses. “Dealing with our own weather…” Another pause. “We’ve jumped back up….”
I stop him there. Last chance. I offer a prompt: “The last sched came in… fill in the rest. Try that?”
“The last sched came in,” says Charlie. “We were the lowest, fastest boat” He changes to a robot voice, a slight reference to Robo-Charlie. My name for him when he delivers garbage, stilted quotes thinking it gets him out of it.
He continues, “We passed Brunel and AkzoNobel. The red boats remain ahead but within striking distance.”
He’s earned that last striking distance. Now comes the fun part. “And how does that make you feel? Sad Charlie? Happy Charlie? Iceman or Goose Charlie?”
“I was not so secretly hoping that we’d be ahead of all of them,” he admits.
I tell him to give me the bowl. BBQ sauce it is.