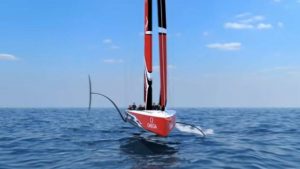 You may have noticed that I have not weighed in on the new monohull design for the next America’s Cup. You may have seen it. The hull is pretty ordinary but it’s the strange appendages that stick out each side to allow the boat to foil that has many people atwitter. Frankly I am not that impressed. I have always gone with the notion that pretty boats sail fast. Yes I know that’s a tad simplistic but I believe it and over the years I think I have been right. This design is anything but pretty. It looks like some kind of space alien. Someone in the comments section on YouTube said it looked like a dog peeing. At the risk of challenging the design team, who I know are infinitely smarter than me, I am going to say that I don’t think that this is going to work very well.
Let me explain. The biggest beef about the last America’s Cup was that there were no passing lanes. The boats got up on their foils and banged the corner. Tacking was slow especially before they figured out how to keep the boat in the air through each tack. As soon as the boat dropped back into the water the speed dropped precipitously. People moaned that they missed the “old” days when monohulls would slam tack their way up the windward leg closely covering their opponent. Catch a good wind shift and you could break through. Man that was racing and I agree. That was racing. In the video that the AC technical team put out it showed an animation of two of the new designs doing just that. Short tacking up a windward leg. But to my mind that’s never going to happen.
Maybe I am wrong but it seems to me that this design is going to have the same problem that the multihulls had. Tacking is slow and the boats are going to drop off their foils. I am guessing that it’s going to take a 75-foot monohull much longer to get back on its foils than it did the AC45’s. My bet is that their best option will be to bang a corner, stay on the foils for as long as possible, work on boat speed and hope that you have chosen the right corner.
Here’s the other thing. Lead is slow. There is no getting around it. Add lead to a boat and it’s going to slow it down. This design has lead in both foils. When sailing upwind the windward foil (full of lead) is there to counterbalance the pressure on the sails. The leeward foil is there for foiling but it too is full of lead. How quick do you think these boats are going to get back up on their sticks after a tack? Not very is my opinion.
The other consideration is cost. Bigger boats cost more. I am not a boat builder but  many boat builders have told me that the new monohull design will be more costly to build than the AC 45’s. One area that I think is interesting and definitely cost saving, is that they are considering going back to soft sails. No more wing masts. Personally I loved the wing masts but there was a very serious cost involved to crane the mast into the boat in the morning and crane it back out in the evening. The boats are dry sailed. The masts had to come out.
To be honest I think that this design is not really a monohull. It’s a trimaran in disguise. It’s not unlike the concept that we put forward with SpeedDream a few years ago. SpeedDream was a catamaran disguised as a monohull.  The lead in the keel flying out of the water was there in place of the windward hull of a catamaran. This design is a trimaran. The boat is the main hull and the appendages are the two other hulls. Remember that a multihull only really starts to move fast when the windward hull(s) come out of the water. Until then they are like a monohull but only with a lot more drag.
One aspect of this concept that I do like is that much of the boats performance is being handed back to the crew. They are not there to pump hydraulics around. They are there to manage the sails and grind the grinders and judging by the video it’s going to take a huge amount of skill to sail one of those boats especially to keep it up on it’s foil.
I really don’t want to be negative.  I love innovation and I really appreciate that a lot of time has gone into developing a creative new idea for the 36th America’s Cup. I am not sure what else they could have done, but I do have one idea. They could have stayed with multihulls…:) – Brian Hancock

You Know You’re Old When….

Tough times for wave jumpers? This from the Professional Windsurfing Association: