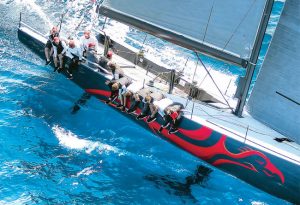 The 52 Super Series 2018 is likely to have a lot in common with the 2015 season in which we saw nine new boats and three new teams on the starting line. For 2018 we again expect nine new boats and this time four or five new teams compared to 2017.
Pictured here: So the wheels turn… American Richard Cohen put together a strong team late in 2016 including Paul Cayard, Peter Holmberg and Marco Constant (above) to campaign the 2014 Botín design Phoenix. He began racing that autumn before a full 2017 campaign. In January 2017 he unexpectedly put his TP52 up for sale. Phoenix was sold to Hasso Plattner, who was aiming to race mainly in South Africa; in fact, at the 2017 Copa del Rey Plattner, racing with his daughter, found he was having so much fun that he ordered a new Botín design for 2018…
Building new at Persico to a Botín design will be Tina and Hasso Plattner, who are first-time TP52 class members. A daughter-and-father combination on the helm is a first; we’ve already had father and son twice!
With the Protocol of the 36th America’s Cup specifically mentioning the TP52 as an exception to its ‘Surrogate Yacht’ rule one may expect the 52 Super Series to be a safe haven for AC teams aiming to practise monohull racing with a similar number of crew as on the future Cup boats.
The Protocol reads: ‘No competitor shall acquire, sail or test any Surrogate Yacht as defined in this Protocol and the AC75 Class Rule.’ And then describes a Surrogate Yacht as ‘Any monohull exceeding 12m LOA which is capable of producing meaningful design or performance information for use either directly or indirectly in the design, construction or sailing of an AC75 yacht, but excluding existing class yachts such as TP52s used only for the participation in and preparation for their class or any other official regattas.’ Quite special to see the TP52 singled out in the AC Protocol, thank you, Defender and Challenger of Record. Read on.