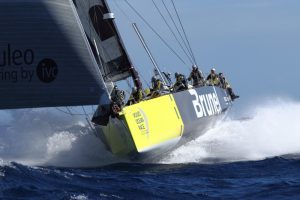 Few people have been involved in the Volvo Ocean Race for as long as Bouwe Bekking who, as the skipper of Team Brunel, is about to embark on his eighth campaign in one of the world’s toughest offshore contests. Bekking knows where his priorities lie and somehow maintaining the condition of his crew in such a long and fatiguing event is probably the most important priority of them all. Hence one thing that Bekking will never mess around with is clothing. Team Brunel is one of three entries this year to have adopted Musto as their clothing supplier.
Since Bekking first competed in his first then Whitbread Round the World Race onboard Philipps Innovator in the 1985-1986 event the boats have only become steadily faster. Back in the mid- 1980s no one had even conceived of a large keelboat that could lift out of displacement mode and on to the plane. Life onboard was a good deal more comfortable – or rather less uncomfortable – back then, and although the pace of the race was not exactly sedate, it wasn’t as ‘by-the-moment’ as it has become today.
‘The boats have become more physical, way faster and therefore also much wetter,’ says Bekking of the VO65s used today. ‘Over the years Musto has done a great job developing foul-weather gear for us that is breathable and flexible, allowing you to do your job using minimum energy and keeping you dry at the same time.’ Musto is already in talks with the Volvo Ocean Race organisers for the next edition that is now expected to take place in about four years’ time.
Read on.

calm as a bomb