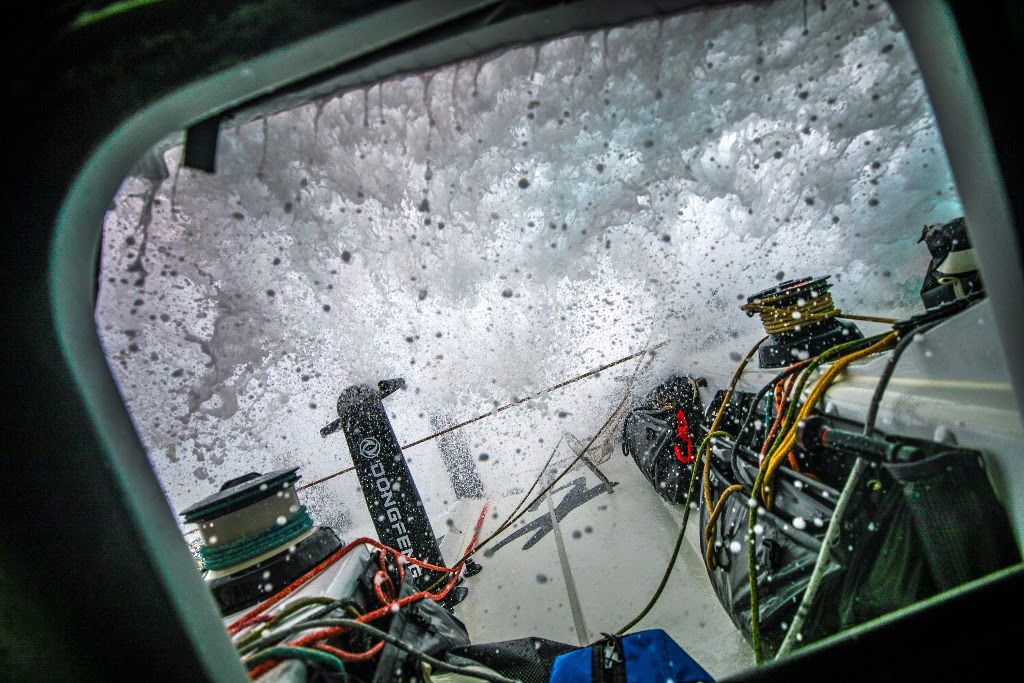 They say in the jungle that the only thing more dangerous in the jungle than a tiger, is a wounded tiger. Clearly the pride of Charles and Pascal on Dongfeng was wounded when, having led Leg 2 of the Volvo Ocean Race virtually all the way from leading the fleet out of Lisbon, a wrong decision leading to sailing too far towards the high pressure threw them out the back door.
Even Pascal was heard to say on the VOR Daily Live “we’re completely fucked”.
The mark of true champions however, is that when they are down they don’t stay down, they pick themselves up.
I have seen Olympic runners knocked over on the last lap, pick themselves up, then pass everyone to take the gold. Football teams 3-0 down come back to lift the trophy – that is the mark of champions.
Dongfeng have not yet re-taken the lead but Mapfre must be looking over their shoulder as the boys and girls on the East Wind (Dong Feng) have just posted the fastest 24 hour run of this race so far, surpassing 530 Nm for the first time taking the wind out of the sails of, not only some of the other teams, but also several pundits who immediately wrote them off for a podium finish.
To give an idea of how the whole team is pulling together to reduce the deficit, and who knows, perhaps even get to Capetown first, below is straight off the boat from Dongfeng skipper Charles Caudrelier:
Our speed is the work of the whole Dongfeng crew. The mood is better on board after our fantastic come back. When I said two days ago that we can maybe make a comeback, I was not sure I really thought it was possible. But I wanted to ensure that we didn’t lose hope and I also always believe that when you sail well and work hard you deserve a bit of luck.
The luck was that the situation – until tomorrow – favoured the back of the fleet. It was important to come back before today and we have done it. Our speed over the last two days has been amazing; it could have been even better if we had not had a small issue two days ago when we lost a few miles. But this speed is crazy. In the last race, we were the king of the light and medium air but we were not fast in heavy weather so we worked really hard to find solutions this winter and this investment has paid off.
I can hardly believe how fast we are sometimes. It reminds me of the old times on Groupama when we were one knot faster than everyone else at times.
But this speed is the result of the efforts of the full crew and the big work we did this winter and then with MAPFRE in August in Sanxenxo. It is also a result of the efforts of the new sailors in Dongfeng Race Team who have brought us their knowledge and their driving skills. Stu and Daryl are just amazing drivers at high speed.
On the cockpit display we have our performance presented as a percentage of the boat’s polars and, I can tell you, it’s not easy to drive after Stu – “Mr 102%!” But this is a good reference and all our drivers now reach this target.
This afternoon Marie was helming and I was watching her, pushing more than anyone. I decided to give up my turn on the wheel and do the grinding for her. But now, ahead of us, there is a high pressure ridge to cross and there are decisions to make. I missed one opportunity a few days ago – I will not miss the next.
This is the last phase of the race if we forget the terrible bay of Cape Town where you can lose so much, just two miles from the finishing line.
Notice also, that unlike some skippers, Charles takes full responsibility for the error that cost them so many miles.
With a leader like this and a crew, obviously, so willing, keen and able to follow makes them a danger to their competitors, whatever the situation.
Shanghai Sailor