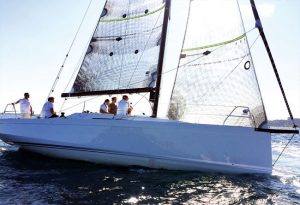 The first new-generation Grand Soleil 34 was launched at this year’s Yachting Festival de Cannes in September and, at the time of writing, boat number two has been launched and a further four boats are under construction. The new ‘34’ actually has an LOA of 10.70m (or just over 35ft), but remains the smallest boat the yard has launched since the original version of the Grand Soleil 34 in 1974.
Pictured left: it’s intriguing that given the brief of a contemporary racer-cruiser with excellent interior and a hull and foil configuration targeted at top-level IRC racing, that the GS34 designers at Skyron delivered a boat with such striking visual similarities to the ClubSwan 50. With a keel gallery that allows 200kg of lead inserts, this slippery design looks a promising candidate for duel IRC/ORC optimisation for next year’s worlds in the Hague
A lot has happened in the sailing world since 1974 and Grand Soleil has moved with the times, creating a modern incarnation of the original. Both boats are beautifully built cruiser-racers, and the differences between them are explained by 43 years of advances in yacht design and construction technique, as well as the evolving priorities of Grand Soleil owners. Read on.

end of the storm

sick of it all

the glass is half empty