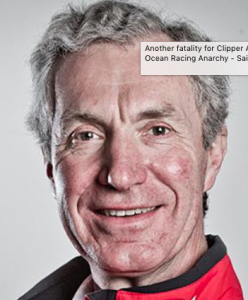 The two fatalities in the 2015/16 Clipper Round the World Race were the first in the company’s history, and after a comprehensive report on those deaths from the UK’s MAIB giving stern recommendations for improved safety procedures at Clipper Ventures plc, the last thing anyone would expect is yet another fatality just a year later!  Yesterday, that’s exactly what happened; 60 year old former lawyer from Bristol UK Simon Spiers was washed off the foredeck of Clipper CV30, yet despite being clipped in, the Clipper says he was separated from the boat and likely drowned.  Spiers’ body was recovered by the crew and given a burial at sea.
No amount of the Clipper PR team’s “quiet reflections” addresses what has to be considered something of a crisis in this high-profile round-the-world ‘adventure race’; in just three years, three participants in the Clipper race have now died at sea; two washed overboard and drowned, and one crushed by the clew of a sail.  If you’re doing the math for the past two events, based on the Clipper’s own numbers (700 sailors per event), that means 1 in 466 Clipper participants has now died – and that’s assuming no one else loses their life on the 2/3 of the current race remaining.  Considering one entry just went hard aground on a well marked shoal off South Africa without any explanation, nothing would surprise us about the Clipper fleet – and that’s terrifying, especially with the lack of experience aboard.
We’re not sure whether the RYA should shut the Clipper down while they figure out just why people keep dying on their boats, but we do think that if 3 people in another sporting event died over three years, there’d be some serious investigations underway of the people who were supposed to keep them safe.
Get in on the thread here.