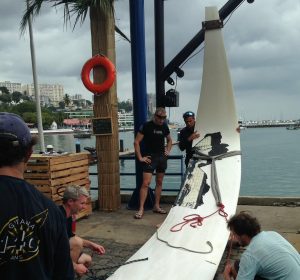 With thanks to photographer Py Leroux and the Ultimboats Facebook Page, we now know exactly why the world’s sexiest sailboat got beaten across the ocean by a boat launched at the turn of the century: Delamination and structual failure of her massive ama foils.  It’s a problem that just about every foiler in history has faced, and what’s odd to us is that the basic solution adopted by all of those designers and sailors – monolithic rather than cored carbon construction – was ignored by the designers of what is probably the most technologically advanced ocean racer on the water.
The Rothschilds will barely notice the six-figure cost of building new foils, but the team will certainly notice the months of downtime it will take to figure out the fuckup and then design and build something more robust.  In such a new class where the best crossover charts, rig, and foil settings could mean a 5% speed advantage,  Gabart, Le Cle’ach and Coville will now have a decided advantage over Josse as the Brest RTW race creeps ever closer.
Chat about the Gitana XVII in the thread. Tip o’ the hat to our 3.5-fingered friend Bora for the heads up.