This is the new foiling TF10 trimaran. A high-tech carbon fest, allowing sailors to foil easily in around 8 knots of boatspeed! Designed from scratch as a super fun foiler for mere mortals, we believe that goal has been accomplished!

About this video: A small crew from DNA recently travelled to Barcelona for the new foiling TF10 trimaran to be tested by a jury of 12 European sailing magazines for the 2018 European Yacht of the Year competition – the TF10 is nominated in the category Special Yacht. After the jury testing for EYOTY, we kept on sailing with other media and prospects for their impressions.
Our mission to sail the TF10 trimaran in Barcelona was surrounded by turmoil as the local Catalonia region was passing a resolution for independence from Spain at that time. Low flying helicopters and a big presence from the local military police added a dimension for sure.
Sailing in indigo blue Mediterranean waters with stunning backgrounds was absolutely fabulous. This video captures some of the sailing experience and as the video clearly shows, we had cloudy and rainy days too. The sun came out as soon as the video team went home. Of course.
Learn more about the TF-10 and DNA Performance Sailing here. [and look for Clean’s boat review shortly! -ed] 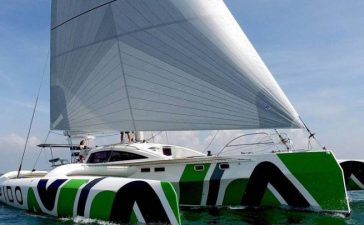