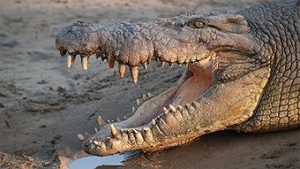 The Tooth About The Tropics
As snow falls on the plains and cold air settles in over much of the Northern world, we’re always wishing we had a longer sailing season, better weather, more sun.  But you know what we don’t have to worry about here in the snowy Nordlands?  The world’s largest lizard and deadliest predator in our dinghy harbors!  Here’s how a massive saltwater croc effected dinghy sailing at Singapore’s National Sailing Center on Monday.

The National Sailing Centre (NSC) has suspended all its water activities after sightings of a crocodile in the waters off East Coast Park on Monday (Nov 6), even as efforts to capture the crocodile are under way.
A spokesman for the NSC told The Straits Times on Tuesday (Nov 7) that contractors at a construction area next to the NSC saw a crocodile on Monday afternoon.
About 120 sailors were affected when water activities were ceased that day
“The Singapore Sailing Federation informed the National Parks Board immediately and called off all water training immediately,” said the spokesman. “As the safety of the participants are our priority, on-water activities will be ceased until further notice.”
The spokesman said this is the first time a crocodile has been sighted near the sailing centre.
Mr Chia Seng Jiang, group director of parks at NParks, told ST that NParks was alerted on Monday and Tuesday to sightings of a crocodile in the waters near NSC.

The Cost of Greatness? 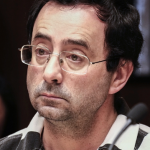 Ailes, O’Reilly, Weinstein, Spacey, CK – the #metoo movement has pushed sexual abuse and harrassment into the sunlight where it belongs, helping millions of women and men around the world finally understand that they are anything but alone.  It’s hit sports as hard as anything else, and it turns out the most successful Olympic team of all time is full of athletes who’d been molested since at least age 13 by their (formerly) highly respected team doctor, Michigan State’s Larry Nassar – who looks like he shops for his clothes, glasses, and general look at ‘Pedophiles R US’.

So next time you’re pissed about winter or about how few medals US Sailing wins, just remember: It could be worse. Far worse.

first in but will it stick?

the gift that keeps on giving