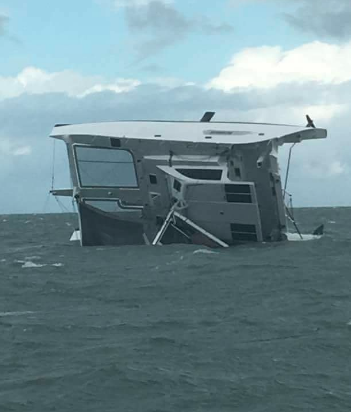 The 40 foot cat Rushour went over at the Royal Queensland on Wednesday, and the driver quickly posted a report to the SA Forums for the benefit of other cat owners.  Kudos to ‘bushsailor’ for a near-perfect after-action report full of lessons.
Forecast was for 20kn se wind.  We set the boat up with one reef and self tacking heady.  THIS CONFIGURATION IS VERY MANAGEABLE IN 20KN.
We started sailing to windward with the intention of building speed then bearing away to go downwind.  Main traveller was fully down and a crew member was holding the main sheet.
Speed built very quickly as we got hit by a big gust (40 kn). Hull started to come up, main was completely dumped but hull kept climbing.  I (helm) turned up to feather the sails but response was slow because all drive was coming from the heady and the bows were pressed.
Boat capsized sideways.  Whole thing took maybe 5 seconds.

lucky we were only in 4m of water and Rushour has a very strong wingmast so we were able to attach ropes to the high hull and tow her around so the bows were pointing into the wind and towed her over.
The bottom hull was flooded and that helped to right the boat.  You need a very big tow boat to pull a big cat over. We used a commercial cat Cat of Nine Tails to pull her up.
We had her upright about 2 to 3 hours after capsize.  I would not want to go through that in the open ocean.  A huge thank you to all the people who rallied around and helped right, retrieve, clean the boat, and for all the messages.
It makes you realise how good it is to belong to a strong sailing community.