Sustainable development is traditionally defined as something that meets the needs of the present without compromising the needs of the future. Using innovative thinking to advance sustainable practices is core to The Schmidt Family Foundation’s 11th Hour Racing program. One area in which the program is now involved is the delicate but still largely overlooked issue of the disposal of obsolete leisure craft… 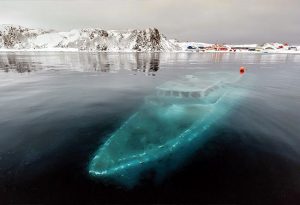 Space is a precious commodity at the Rhode Island State central landfill: in 2038 the 1,040-acre site will stop accepting new material. The looming deadline has made one waste problem more complex: what to do with old fibreglass hulls?
The steady accumulation of end-of-life vessels in coastal communities across the United States and Europe has sparked discussion around a variety of intertwined environmental and economic issues. Currently, the most common destination for these ageing craft is the landfill or worse: abandoned in backyards, boatyards or local waterways. Landfill managers typically use a simple mechanical process to cut and crush the glassfibre mat, polyester resins and ancillary material, subsequently compressing and burying remains within the greater mixture of municipal solid waste.
Based on the established estimates of national end-of-life vessel populations, these traditional processes are already burying millions of metric tons of fibreglass around the world each year. This practice is a mistreatment of usable composite material and is environmentally perilous waste management.
Between 2003 and 2012 it is estimated that two million recreational craft (an average of 210,000 per year) were retired in the United States, according to surveys by the National Marine Manufacturers Association. Similar approximation has not been established in the European Union; however, leading members of the European boating industry suggest that coastal nations in the EU retire between 6,000 and 9,000 recreational vessels annually.
Read on.