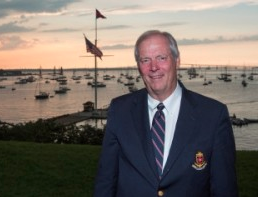 Gary Jobson’s in hot water again after specifically telling reporters in August that a report of the National Sailing Hall of Fame moving to Newport was erroneous.  “For the record: The National Sailing Hall of Fame is located in Annapolis, Maryland, and we are diligently proceeding through the development process for a new facility in Annapolis,” Jobson said in a written statement after rumors surfaced of the NSHOF looking at a Rhody option.
Today the long-rumored move looked a lot closer to reality, after the Newport Daily News reported this morning that more than 100 people gathered in Newport City Hall on Wednesday to listen to a pitch by Sailing Hall of Fame President Gary Jobson about their proposed spot for the organization and Hall.  The full timeline of Jobson’s efforts to shop the NSHOF around are in this piece in Newport This Week.
For the record, and to be perfectly clear – we have been quite impressed with the success of the NSHOF’s vision, and Gary’s been a big driver of it, so for that, we salute him.  We also don’t think it’s a bad idea at all for the NSHOF to move to the city that’s the clear capital of sailing in America, and it’s likely that there’s way less money available from the Annapolis community and government than in sailing-subsidized Rhode Island.
But if the guy doing the negotiating is making misleading statements to the media that make it look like city is being played against city – and his credibility has already taken a recent hit – the whole thing might well be doomed.

what are the odds?