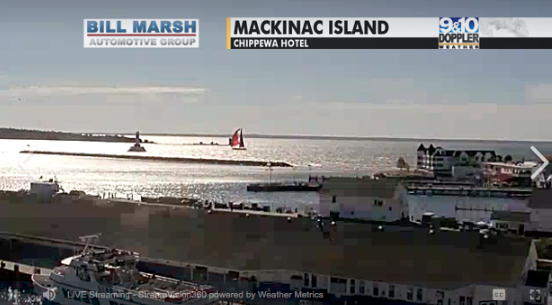 We’ve gotten a surprising amount of mail and comments questioning the newsworthiness of Il Mostro’s smashing of Steve Fossett’s 20 year old Chicago-Mackinac course record, and we wanted to set the record straight for all the coastal-living folks who don’t get it.
Firstly, about record-setting in general: Part of the problem is that there’s not a huge record-setting culture in American sailing, and many US sailors just don’t understand the point.  Lloyd and Brian T did a great job smashing tons of records on the Phaedo 3 just as Ryan B and the Lending Club folks did with their big trimaran, but they’re the first American-owned teams since Fossett to really take aim at record-breaking campaign  and it will take many more of these to develop the kind of US prestige and status for world records that they have in places like France and the UK.
Secondly, the Midwestern angle: Understand that this record was more for Midwestern fans of adventure and sailing than a world-wide audience.  You ocean-dwellers don’t realize that the Chicago Mackinac Race is a monster in local sports, and in fact it’s a bigger race by participation than the Newport-Bermuda, Transpac, and Ensenada Races combined.  Hell, with an average of around 300 and a 2008 fleet near 450, it’s the biggest distance race in the hemisphere by far.  Add that to the sheer volume of media the race gets from TV and news reporters in the third-biggest city in America (and the tens of millions of hits their race tracker gets) and you have lots and lots of reasons for even the average joe in Chitown to pay attention. 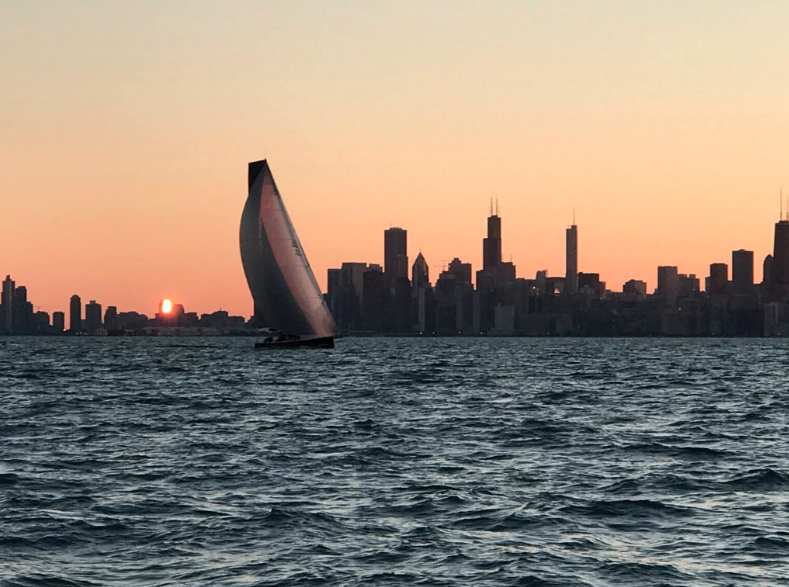 Thirdly, the whole Course vs. Race record thing.  Think of it this way: If Lewis Hamilton sets the fastest lap ever at COTA in Austin next week, he’ll have the highly prestigious F1 Race Record for the track for another year.  He probably will get the “Course Record” in qualifying as well, as he’s done the past couple of years.  But if some unrestricted 3000 hp frankenstein of a ground effect car can somehow go and do 500 laps of practice and then set a lap time 1 second faster than Hamilton, Lewis will no longer own the outright lap record.
It’s the same here: Il Mostro sets the outright course record, which for the vast majority of big records (think RTW, transatlantic, route of discovery, round britain and ireland, etc) is the one that counts most.  To those who race the mack regularly, maybe not, but it will be Thornton’s and Il Mostro’s name on the WSSRC page, and that’s pretty damned sweet.
Fourthly, and perhaps most importantly to us, Il Mostro becomes the first monohull to beat a record set by a multihull in ages!  With monohulls generally relegated to their own ‘division’ records in most passages or races – akin to the ‘tallest midget’ award – it’s refreshing to see a big, oceangoing yacht take nearly an hour off a record set by a fucking America’s Cup catamaran that weighs not much more than Il Mostro’s mainsail.  Seriously boys – props.
And finally, the Club: We really love the fact that the entire thing was orchestrated with the owner of the Mack race, the Chicago Yacht Club.  While all clubs have their issues, the CYC lately is about as far from the stuffy, elderly-run clubs we all know about as you can get, and they’ve made a targeted effort to get more things happening out-of-season to make sure their race continues to set the standard of offshore US races.
The course requirements (minimal), start line, and finish line were all agreed upon between the owners, yacht club & WSSRC, and the commodore of CYC & Chicago Mac chairman both met us at the dock pre-start. The club & WSSRC had representatives visually confirm the start & finish along with an onboard supplied tracker.  Additionally the club is encouraging any/all boats to make additional runs at the record, and as the record-setting navigator told us, “It’s waaaay more fun to pick a nice time to sail up the lake!”

Agree, disagree or throw shade at us here.  Photo from Tim Devore and crew list here.
ScotOctober 19, 2017
Leave a reply

you get what you pay for