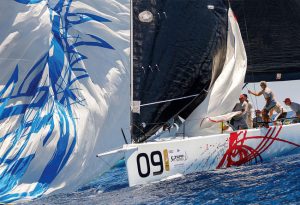 Looking back on two hot and steamy weeks in Mallorca where we held the Puerto Portals 52 Super Series and the Copa del Rey, there is every reason to be pleased. In Puerto Portals we saw the fifth different winner from the five 2017 Super Series events we have completed so far: Quantum in Key West, Azzurra in Miami, Platoon in Scarlino, Rán in Porto Cervo and Provezza in Puerto Portals. Three owner-driver and two pro-driver wins.
Pictured: The talent saturating the TP52 Super Series makes a foregone conclusion of any debate about the world’s premier grand prix sailing circuit of 2017. Among those backing up owner-driver Vladimir Liubomirov on Bronenosec (to windward) are multiple Cup-veterans Ray Davies, Tommaso Chieffi, Paul ‘Flipper’ Westlake, Simon Daubney and Steve Erickson. Among the similarly gold-plated crew on Ergin Imre’s Provezza you will find Peter Holmberg driving this season, plus Tony Rey, Nacho Postigo, Daniel Fong and with former Cup skipper John Cutler in the coach boat… Not the class to turn up to after a late night
The Provezza win was special, not just because it was the first time Ergin Imre and his pro-am team took the highest stage at a Super Series event, but also because they had been close to a win twice before this year and seemed to have developed a depressing talent for sailing themselves off the podium on the final day.
Not this time, however, much to their own delight of course but noticeably also to the delight of all the other teams. This was very visible at an emotional prize giving ceremony; Ergin is the archetypal passionate boat owner as well as a strong believer in creating time for the social aspects of our sport, like bringing family and friends to events, good crew and owners dinners, or just a decent conversation. And as such he is truly liked. Let’s say if anybody had to win this one and it is not to be ‘us’ then it should be him.
Read on.