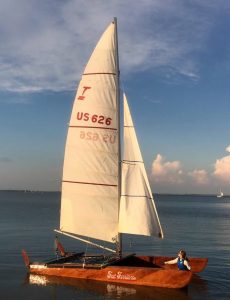 “Fast Furniture” is a 40 year-old red cedar Tornado that has recently been refinished. It is believed she is one of the rare Gougeon build Tornados. Colby Sharp bought the boat from Doug Graff in the early 1990s and we raced it for several years. After Colby’s passing, the boat was stored in his father’s airplane hanger for about 17 years, until I acquired her in October 2016. Craig Clark donated countless hours of striping off 40 year-old epoxy and some really bad paint. After getting the hulls down to bare wood, the next challenge was to lay 2 oz glass with West System epoxy with an additional 2 coats of epoxy over that. My goal was have her ready for Lakewood Yacht Club’s Keels and Wheels Antique Car and Boat show.
I made the deadline and the boat turned out fantastic. The next challenge was to look over the mechanical aspects and make sure she will stay together and nothing explodes. That day came where it was time to sail test her. The first test sail was a relaxed 8-12 knot day. Seemed perfect to get her on the water. While I was assembling the boat for the show, I noticed the front cross beam has some corrosion spots where the hull touches the beam. At this time, I was at a loss because the beam sections have not been extruded in 35 years, and the hulls are built exclusively for each beam. I reached out to Mike Zuteck if he had any broken beam sections I could use as a splice. 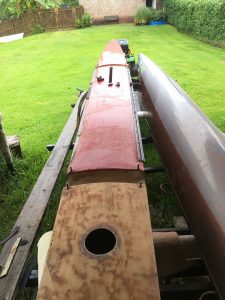 Amazingly, he did have some pieces, as well as an unused beam section – I mean completely unused, no holes at all!!!! Talk about jack pot. Lucky for me, Mike has a bit of a history with the Tornado and has been extremely eager and willing to help in every manner.
I was able to get the hardware transferred over and found more mechanical aspects needing to be replaced. Better now than at 20+ knots. Mike was even able to off load some of the custom designed beam straps from his “secret stash” of boat parts.
The Tornados were built to have everything custom fit with a very low tolerance – annoyingly low. The new 40 year-old beam was about 1 mm larger circumference than the old one. So, 3-1/2 hours later of sanding the beam socket down so the new beam fits, I was able to get the new beam on the boat.
Unfortunately, the custom beam straps did not agree with the new beam. I was able to acquire some raw stainless strap from JZ Custom Rails (a local machine shop) and build custom straps at the boat. We finally have the boat ready to sail – beams on, trampoline on and laced, mast on, boom attached, jib on, main on…. now reality set in… we are ready to sail. Solvig Sayre was gracious enough to agree to race with me in the upcoming Wurstfest Regatta; which meant we need to at least sail once together. Today was our day.
We got the boat splashed and off we went. A pretty easy day; speeds 10-14 knots with no effort. Solvig was able to get out on the wire a few times and somewhat get accustomed to the boat. On our downwind run, she had commented the boat was “cruisy”… I took that as a compliment because I’ve always felt the Tornado is the Cadillac of catamarans. If you have sailed one, you know what I mean. Without a spinnaker, she was able to relax downwind and actually enjoy the sail. cruisin’! 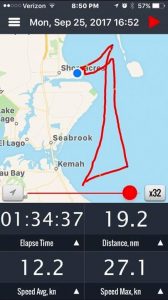 This ended up being a fantastic first sail out – thank you Solvig!!! A long time sailing friend was in town visiting and the conversation came around to “Fast Furniture” and sailing… We agreed that we need to go out. Buddy Brown has a long history on Tornado (like, in the 1970s long)… During the day we were going out, the forecast was for only 10-12 knots.
Kind of a buzz kill, but I will take what I can get to get him on the water. While rigging up, we both commented that the wind felt better than we expected. After leaving the beach, it was apparent the wind was better than 10-12, it was more 15 to 18 with a couple of puffs. PERFECT!!!
We ended up beating up Galveston Bay and over towards TCYC covering 19nm in about an hour and half – with a top speed of 27.1 knots. Several times the boat would be locked into the grove and humming, either of us would start randomly laughing…
Out of nowhere, one of us would just comment “amazing”, and we would start commenting how stiff the boat is. There are a few more things I need to do to get her back to full speed, but she’s coming!!!
– Anarchist Scott