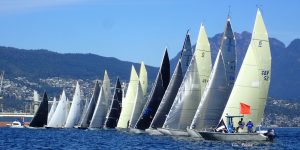 The Six Meter World’s were completed last week and now that I am back stateside, I can file a post regatta report. Many of the participants were asking if I was going to be doing daily updates but I thought it best for me to submit a post event report once I’d crossed the border!
Royal Vancouver Yacht Club hosted the event and once again they didn’t disappoint when it came to their treatment of guests and their ability to actually score an event. First of all, when it comes to hosting regattas like this, the host club typically lays on free coffee and donuts/bagels etc. in the morning for the competitors who have shelled out large sums of cash to enter their event. The RVYC has a small restaurant, for lack of a better term, on the lower level named The Star & Dragon. In the morning the competitors were greeted by a server who could have been Harry Potter’s uncle demanding that every coffee had to be signed with a chit, which included a service gratuity and was a tedious process. When all was said and done, none of us could give a chit. Nice work RVYC.
Let’s start with the fleet, which consisted of so many heavy hitters it was ridiculous. World Champions, America’s Cup winners, and Olympic sailors abound. Quite the collection in the classics and moderns alike. So much talent gilded around a scenically beautiful but awful venue that featured anchored tankers littered around the race course, start line orientation that was interesting, variable current and ship induced wind shifts on the laylines. Tankers should never be part of a World Championship…!
So, let’s move on to the pre-world’s regatta: The Westerleigh Cup. Moderns and classics battling it out. In the moderns, the local golden boat, New Sweden won. When it came to the classics, there were two results: Dennis Conner on My Be VII had won on the official board and on the scrolling high tech RVYC board, Lucie had won.
When it came to the trophies, Ranier Mueller – who owns and/or has interests in almost the entire Northwest 6 fleet –  announced that DC had won and there was all the usual pomp and circumstance. Turns out it was another case of poor regatta scoring management and two days later the trophy was awarded to Matt Brook’s Lucie. More on them later.
The World’s got underway and we got a look at interesting team dynamics from the host club ‘hot shots’ on the highly remodeled ‘New Sweden’. In race four they decided to ask for redress after over standing a weather mark. They actually got it from the protest committee and a firestorm ensued with multiple protests being filed the next morning. ‘New information’ was the reason for reopening the hearing, but it was apparent that the New Sweden redress request was ‘creative’ and they and their advisors were about to get deep sixed by the international 6mR community.
The optics for the top boat from the host club to be given redress points looked terrible and the regatta was about to implode. Luckily for them, the redress decision was rescinded and the results were corrected.
Prior to this incident, in race one, the highly favored Sophie II team from Switzerland got some wood courtesy of the ladies on Scoundrel. In dueling protests based on an altercation at the windward mark, Scoundrel auto-tacked and locked rigs with Sophie. Simple, Scoundrel gets tossed, right? No, both boats were DSQ’d despite the Sophie team’s attempts to introduce tracking and photographic evidence showing that they had locked rigs and had no steerage thanks to the original faux pas (that’s French). Let’s just say that had Sophie not been DSQ’d the final results would have looked quite different.
When the dust settled, we saw the cream rise to the proverbial top. In the moderns, last year’s champion, Phillippe Durr’s Junior from Switzerland, dominated and slid into the top slot. A polished team that is at the top of their game. 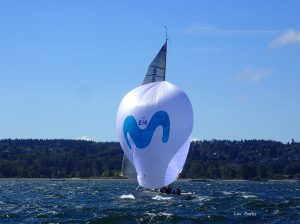 In the classic’s, is was great to see the King of Spain guided by Ross MacDonald win with the venerable Bribón Gallant . To say he, his crew and entourage including security detail were a class act would truly be an understatement. Hats off to them for sailing a fantastic regatta.
Okay, for those who have made it this far, we get to the trophy dinner. Amongst all the pomp and circumstance, one of the awards, the KSSS Trophy for top Rule 2 boat gets awarded to Fridolin, the beautiful and fast boat from Finland. They get the cup and are celebrating when a few minutes later Matt Brooks, owner of Lucie grabs the trophy and they are told that Matt’s boat, Lucie had won this award.
Just to be clear, rule 2 boats have to have their original keel but Fridolin’s keel lead was used by the Russians in WW2 for bullets so there was no choice for the owners about the keel. The keel was, however, the same as original. Methinks, Matt and the professional Howdy Doody impersonator he has driving the boat lost track of the big picture here (not surprisingly). I reached out to the owner of Fridolin for his take on what transpired but have not heard back.
One of the nice things about a World’s is you get to socialize with some great teams. Hugo and the Sophie II team epitomize how a well-run 6mR program should look. The Junior guys as well as the British teams were fun to hang out with and always willing to help or offer tips. One tip I got from Michel, the tactician on Junior, was that they keep a bottle of Oban on the boat and pour some on the deck then all have a swig before each race. Maybe that’s the secret to their smooth demeanor and performance on the course?
I should also say that there were many people who worked tirelessly to make this event work as well as it could. The regatta volunteers and measurers were exceptional and there were a number of the club staff who were friendly and really made an effort to welcome the participants. Others, not so much. 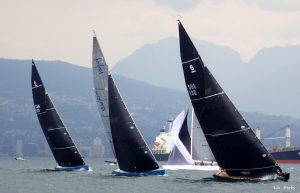 A special mention should go to the guys who helped coordinate all the logistics for the boats at two locations. Steve White and Adam Thompson working out at the Lynwood Yard were fantastic. Nigel Ashman who was coordinating the boats out of Shelter Island made sure they were towed to the club and ready to race. A huge thanks to these guys for superlative service to the event!
Next year’s Europeans will be held in La Trinité-sur-Mer in France with the next World’s in Finland the following year. I see nothing but continued growth for the 6mR class and a very positive future moving forward. Results. Photos thanks to Lin Parks.
-Snapper