IOD of the storm 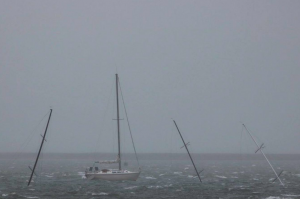 This photo comes not from the sites of Caribbean, Florida, or Texas, where the combined hurricane season is already the worst in history.   Nope, it’s from Nantucket (with thanks to SA’er ‘MauiPunter’), where some of the oldest living one-design boats sank during the torrential rain from Hurricane Jose on her lazy jaunt up the North Atlantic.  It was just a week after the IOD’s North American Championship and one anarchist says 6 IOD’s sank during the storm, but if there’s one thing that’s harder to kill than a cockroach, it’s an IOD.  We hope they’re dried out and back in action soon. 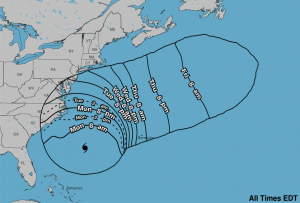 Meanwhile, now it’s Cape Hatteras and the Maryland shore’s turn, and don’t let the fact that someone at NOAA actually drew a dick and balls in the Storm Form Winds Arrival map let you underestimate this bitch.  Good luck to all in the path, and best of hopes to our thousands and thousands of screwed friends in the Caribbean, Florida, and Texas.

and now for your moment of zen