reelin' in the years 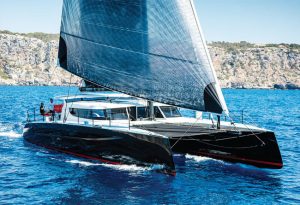 It was only a year ago that the HH66 was introduced to the luxury performance catamaran market; since then activity both in the boatyard and on the racecourse has been frenetic. The potential this boat showed in the design brochures and renderings from Morrelli & Melvin is translating into reality, with outstanding performance, reliability and, most importantly, customer satisfaction.
HH66 hull no1, R-SIX, which was delivered to Valencia in June 2016 and promptly set out to sea, cruising as far east as Cyprus, was put on display to an admiring crowd at the Cannes Yachting Festival, and then attended the inaugural edition of the Multihull Cup Regatta in Mallorca. Sailing in a competitive class of more seasoned peers, including Coco de Mer, Slim and Nigel Irens’ custom 78 Allegra, R-SIX pounced on the challenge, finishing in first place overall.
In January this year R-SIX crossed the Atlantic in time to shift from cruising to racing mode for the Caribbean 600, where light winds prevailed for much of the 600-mile course. With gourmet food and plush accommodation, R-SIX raced in comfort and finished third behind two rather less commodious MOD70s – not a bad result.
She then competed in the St Maarten Heineken Regatta in March, defeating all three 60-footers in class and coming in second overall behind the nimbler, seven-ton, custom-built Bieker 53 Fujin.
Read on.
Title thanks to legendary Steely Dan.

build it, kill it