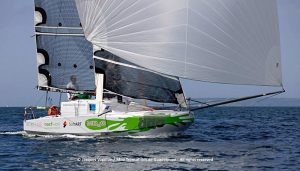 There has not been any other sailboat class that has sparked as much innovation as Classe Mini, the class association behind the Mini 6.50 sailboats. These tiny yachts are on the cutting edge of sailboat design and have been since the class was first introduced in 1977. Take for example the Mini Eight Cube which will be skippered by the Swiss sailor Simon Koster in the upcoming Mini Transat which starts on October 1. Koster was one of the first to go with the blunt scow-like bow rather than a conventional bow and the boat proved to be super fast in all conditions except upwind in light winds. While there is plenty of balls-to-the-wall downwind sailing in the Mini Transat there is also quite a bit of light upwind sailing and that led to a seventh place finish for Koster two years ago.
Two years can be a lifetime when it comes to sailboat design and trends come and go. Most recently the trend has been toward foiling and many of the new Mini’s have foils which allow the boats to fly well above the water. It’s unreal to see some of the footage of these boats ripping it along completely out of the water. Eight Cube was one of the first to be equipped with foils but Koster has reversed direction and ditched the foils replacing them with daggerboards.  “Changes have been made to increase performance, perfect the design and improve preparation,” he said. “The foils have been replaced by daggerboards, and the boat has been lightened and simplified.” 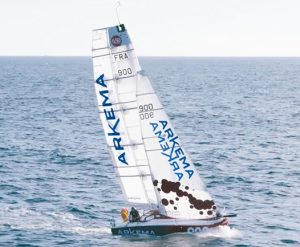 One of the skippers who opted to keep his foils is Quentin Vlamynck, skipper of the Mini 6.50 Arkema 3. The foils extend out of the side of the boat and make a sharp upward turn with the first part of the foil proving lift and the upward part acting as a kind of daggerboard to stop the boat from slipping sideways. One of the bigger innovations on Arkema 3 is its wing mast that looks and works in a similar manner to the wing masts on the Americas Cup catamarans except that the mast is not solid. The front section is a foil structure covered in fabric. The sail hinges at around the midpoint and the aft section is a full batten main. The sail hinges at the battens with the battens from the front section lining up with the battens of the back end. These are just two examples among many of the ways that Classe Mini is leading the way and pushing the barriers of yacht design. Those charged with coming up with a new class of yacht for the next Americas Cup would do well to talk to some of the young designers behind many of the new Mini 6.50s.
The next Mini Transat starts from the port city of La Rochelle on the west coast of France on October 1 and the first leg goes to Gran Canaria in the Canary Islands, a distance of 1,350 nautical miles. It’s usually a struggle to get across the Bay of Biscay, a difficult stretch of water on a good day, but not fun as the early winter gales start to sweep in from the Atlantic. Once around the northwest coast of Spain the fleet will pick up the Portuguese Trades and have a ripping ride to the Canaries. After recouping and rebuilding the fleet will set off for Martinique in the Caribbean some 2,700 miles away. While on paper the second half looks to be the easier part of the  race, it’s often as much of a challenge as the first leg. In late October the Trade Winds start to blow long and strong and it’s a razors edge ride as the skippers pile on as much sail area as they can to get an edge. Most of the Mini 6.50s carry massive asymmetrical spinnakers set from extra long bowsprits say nothing of the boats flying out of the water. One can only wonder what it’s like to sail at those speeds, on such a small boat, at night when squall activity picks up.
The 2017 Mini Transat has attracted 81 sailors of which 11 are women. The bulk of the sailors, 54 to be exact, come from France with the rest from across Europe. Sadly there are no entrants from either the UK or the USA. This most iconic of all sailing events barely hits the radar screen of American sailors which is a bit sad because the race is an awesome show of innovation, perseverance and sheer guts. You can bet that it’s a challenge to sail all the way from France to the Caribbean on a boat that is four feet smaller than a J-24.
– Brian Hancock