We think the war on drugs is perhaps the biggest US policy failure ever. That this is what we send the Coast Guard to do is an insult to what their real mission should be. Thousands and thousands of people are jailed, families torn apart, while billions and billions of dollars have been and continue to be pissed away. The result? Almost exactly the same drug use percentage by American citizens now as when this disastrous policy was enacted decades ago. 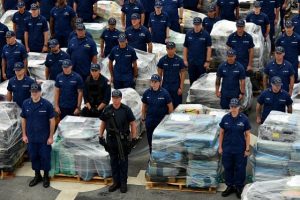 In a ceremony in San Diego on Wednesday, the crew of the Coast Guard Cutter Stratton offloaded an impressive 50,500 pounds of cocaine onto the pier. The drugs were captured in 25 interdictions in the eastern Pacific by the cutters Stratton, James, Dependable and Steadfast and the destroyer USS Chafee.
The ceremony capped off a record-setting fiscal year for drug seizures at sea. All in all, the USCG has captured cocaine shipments totaling to 455,000 pounds since last October, edging out last year’s record amount by roughly six tons. This year’s final number could be higher, as there is still one week left before FY2018 begins.
Read on.

we call it frisco