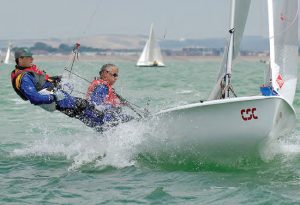 Making sense of sailing is hard enough when you’re in the race, let alone when you’re on the outside looking in, whether as organiser, coach or spectator. But the advent of accessible GPS tracking is now starting to make things easier to understand and Germanybased software giant SAP is working hard to refine the technology while – and this is crucial – also making it relevant at a level of regattas below the rarified heights of the America’s Cup.
SAP was founded in 1970 by well-known racer of maxis and 505s… Hasso Plattner along with four of his fellow former IBM software engineers. So a healthy racing connection from the start. Today Milan Cerny is the innovation and technology lead for sailing at SAP Sponsorships. ‘When we started working with SAP Analytics in 2010-2011 it was not much more than a live leaderboard on the edge of the screen… though that was already quite a breakthrough for the sport!
‘Making sense of who’s in the lead and how that lead is changing from one side of the course to the other, it’s not even that easy to know for the sailors, let alone those watching from outside.
‘Bit by bit over the last five years we’ve added more and more functionality, working closely with sailors and race officials to help make sense of the racing by taking advantage of the data that we can now grab from the boats, the wind and the racecourse.’
Read on.

the old man and the sea