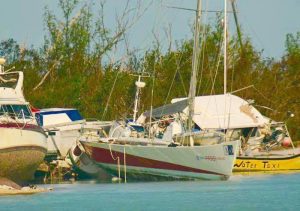 I was a tad bummed to see this pic on my Facebook feed this morning. The red and white boat washed up there after Hurricane Irma was my ride for the 89/90 Whitbread Round the World Race. It’s called Fazisi and was the Soviet Union’s first, and by happenstance, last entry in the Whitbread. When the race started the boat had a large Hammer and Sickle flag flying off the transom; by the time the race was over the Soviet Union had pretty much disintegrated.
I formed a partnership with the boat’s designer and we chartered Fazisi for $1 for a year. We brought the boat to the United States with a plan to use it as a publicity vehicle to raise money for a joint US/Russian entry in the 93/94 Whitbread. Fazisi arrived in Boston on the Fourth of July and took the place by storm. For one the look of the boat is a real head turner. It’s low slung with a very distinctive bow but it was the Hammer and Sickle flapping in the breeze off the stern that pretty much freaked people out.
You see in 1990 most people had never seen a Russian person in the flesh. For years the propaganda was that they all were evil and communists and doing bad things behind the iron curtain. We had a crew of 12 (former) Soviets on board and funny enough, they looked just like the rest of us. They all had families, some had children and all they wanted for themselves and their families was a better life. Sound familiar?
We kept things going and the crew fed by selling T-shirts. We made up shirts that said “The Russians are Coming,” and sold them off the boat. They were a hit and the money was coming in fast but not as fast as when one of the Russians got a great idea. His name was Juki and he figured that he would sell more T-shirts if he offered a small shot of vodka with each sale. We bought a few gallons of cheap vodka, some plastic shot glasses, and business took off.
We never did raise the money for a joint US/Russian Whitbread entry. You see one of the Russian crew ended up having an affair with my wife which pretty much ended things. Well it did end my marriage but what the heck I got a beautiful daughter and a couple of good stories out of it.
– Brian Hancock.

built to last…for one day