We believe that hell may have actually frozen over a few hours ago.
We’re not sure how else to explain the fact that of the seven teams just thrown out of the J/70 World Championship for measurement violations – in Italy – five are Italian!  Organizers even have the support of the J/70 Italian Class despite the stature of the excluded owners, which includes the current Alcatel J/70 Cup champion and several top teams.   It’s a sign that the folks running the J/70 are taking their little boat as seriously as they have long needed to, given how prominent and huge the class has become since their first Worlds barely 3 years ago.
As past competitors in the Class, we’re not surprised to see the hammer finally drop on some of the over-the-top mods that have been creeping in since the get go, but we are definitely surprised and quite impressed to see it happen in a place that’s notorious for ‘turbo” Italian one-design entries that get away with it (anyone remember the Melges 24 bulb with chines or the Farr 40 that floated 2″ high of her lines? We do).  We’re also not saying that the DSQ’d boats are full of outright cheaters rather than opportunists taking advantage of Class Measurement guidelines and tools that were less than precise, but the hammer doesn’t care what the nail looks like, as long as it is a nail. Those rules and tools have now been tightened up, which should mean fairer racing for everyone in this huge fleet.  Bravo, J/70 Class admins and measurers, and bravo, Italia! 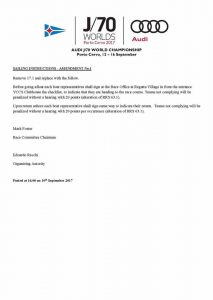 Anyway, the official notice is on your left.  From Italy, the DSQ’d boats are Achille Onorato’s Mascalzone Latino Jr (Francesco Bruni, tactician), Allesandro Molla’s Viva (Nicollo Bianchi, tactician), Marco Salvi’s Vertigo (from Porto Cervo, the event host, with Charlie Mckee, Tactician!), Claudio Dutto’s Asante Sana, prior Worlds podium finisher Carlo Alberini’s Calvi Network (Branco Brcin, tactician), Mauro Mocchegiani’s Rush Diletta (Matteo Ivaldi, tactician), and the Alex Semenov’s Russian-owned New Territories (tactics by Portuguese J/80 and SB20 World Champion Hugo Rocha).  We’re not sure whether this makes those pros more marketable or less marketable, but you might want to double check their work the next time they say ‘it’s legal, don’t worry’ before your big regatta!
Is this another case of pro sailors ruining a class, or does this kind of thing only happen when Classes slack on their measurement controls?  And is the J/70 Class’s action signs of great governance to come?  We’ll find out when SA brings our coverage to the J/70 Worlds on Wednesday (if the Mistral has shut down by then, that is!) . Until then, there’s of course a thread…