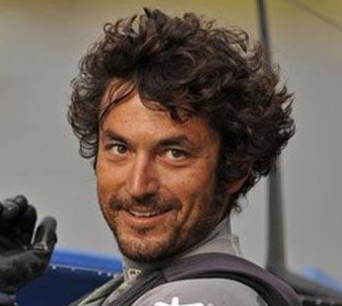 Our thoughts go out to our long time friend and an SA’er since the very, very beginning: We’re talking about double Moth world champion, Olympic Nacra sailor, and all-around stellar guy Bora Gulari.  We are waiting on a statement from the US Sailing Team, but Italian website Saily.it beat them to the punch with the story.  We’ll publish USST’s version when we get it in a few minutes.
UPDATE: Ignore what we wrote before, because it is inaccurate.  What a surprise from the Italian sailing press! [/sarcasm]

Portsmouth, R.I. – US Sailing Team Nacra 17 athlete and Rio 2016 U.S. Olympian Bora Gulari (Detroit, Mich.) suffered an injury during a training incident on Wednesday, as he and teammate Helena Scutt (Kirkland, Wash.) were preparing for the upcoming Nacra 17 World Championship(September 5-10, 2017) in La Grande Motte, France. Gulari lost part of three fingers on his right hand after he came in contact with the boat’s rigging during a capsize in strong wind conditions. Gulari is currently recovering at a local hospital following surgery, and is expected to recover in approximately four weeks.
“This is an unfortunate setback, but Helena and I will bounce back from this and continue our campaign for Tokyo 2020,” said Gulari, a two-time Moth World Champion and the 2009 US Sailing Rolex Yachtsman of the year. “I’ll definitely be back on the water as soon as I’m able, which should be in about a month.”
Italian Sailing Team coach Gabriele Bruni provided help to Gulari and Scutt immediately after the accident, with US Sailing Team coach David Howlett, who was assisting with running practice races, arriving a few minutes later. Scutt, who is also a U.S. Olympian, was uninjured in the incident. Scutt sailed the boat back to shore with help from Rio 2016 Olympic gold medalist Santiago Lange of Argentina, who came out to the scene from onshore to assist.
“We are grateful for all the help and support we received today from the Olympic sailing community, and especially from our competitors and coaches who helped us on the water and after we got back to shore,” said Scutt.
Gulari and Scutt will retire from the 2017 Nacra 17 Worlds, and focus on Gulari’s recovery in the coming weeks.
Tags:Bora GulariNacra 17olympic
ScotAugust 30, 2017
Leave a reply

gold finger The Ran teams new TP52 is yet another masterpiece of sex appeal. Amazingly, the new boat is even hotter-looking than the dominating J/V 72 of the same name t