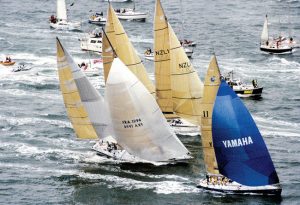 With the announcement of its as yet unchristened new, foil-assisted monohulls for the 2019-20 crewed lap of the planet, and beyond, the Volvo Ocean Race continues its longstanding tradition of letting the Imoca class do much of its full-scale R&D. But has it all happened too fast this time?
Water ballast was first introduced in the Whitbread 60s for the 1993-94 race having been used on the Imoca 60s’ forebears, the Open 60s, from the early 1980s. VO70s made their Volvo race debut in 2005 with canting keels, some 12 years after Isabelle Autissier’s Ecureuil Poitou Charentes 2 became the first Open 60 to use one (and several more years after Michel Desjoyeaux – inevitably – had introduced the canting keel to the Mini 6.50 fleet).
Pictured above; It is September 1993 and the then Whitbread RTW race is taking its first big leap into the future after 20 years of evolving IOR design, race winner Ross Field’s Whitbread 60 Yamaha 2 leading the last ever IOR maxis out of the Solent at the start of Leg 1. Yamaha would return to the Solent only 10 hours behind Grant Dalton’s winning maxi… overall.
In comparison the latest change has been much swifter, the first foil-assisted Imoca 60s launched barely two years ago with the first foil-borne Volvo boats following just four years later.
What must be of some concern is that, compared to water ballast and canting keels, foiling technology is way more complex and tricky to engineer in an offshore environment. For example, of the five newgeneration semi-foiling Imoca 60s on their first major outing in the 2015 Transat Jacques Vabre, only Banque Populaire finished (with structural damage), while others suffered severe failures, the worst being Hugo Boss which was nearly written off.
In last winter’s Vendée Globe five of the seven foilers finished, with Alex Thomson famously breaking one of Hugo Boss’s boards. Upon finishing, race winner Armel le Cléac’h admitted that he had been cautious about using Banque Populaire’s foils: ‘I tended to use them [only] in situations where I thought I needed to boost my speed, like a turbo, when I needed to attack a little more.’ But this may also have been to avoid repeating the same damage that sistership Edmond de Rothschild sustained to the top of her port foil, which partially broke within its case leaving it, as skipper Seb Josse alarmingly reported, ‘just hanging by two screws’.
Read on.